Author Daniel Kenney and I discuss his career in publishing and his advice for writers. We go to some weird places with our mutual love of flying saucers and even discuss whether or not the moon landing was faked (probably not, but maybe). And I read a selection from BANNEKER BONES AND THE GIANT ROBOT BEES. My apologies for coughing and sniffling as I'm getting over a nasty bought of the flu. 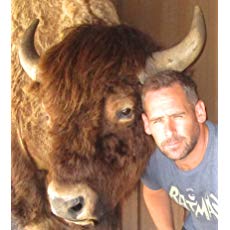 Daniel Kenney is the co-author of the hit detective series, The Math Inspectors and the author/illustrator behind the hugely successful Big Life of Remi Muldoon series. He writes funny books for smart kids and his titles include The Beef Jerky Gang, Pirate Ninja, and Katie Plumb and The Pendleton Gang.

Daniel and his wife live in Omaha, Nebraska with zero cats, zero dogs, one gecko, two very lost toads, and a large shoe full of kids. When those kids aren't driving him nuts, Daniel is busy with his other passion, traveling the world by jet pack. 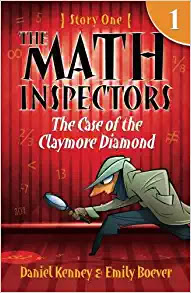 Do your kids love math? Hate math? Always ask you: "When am I ever going to use math?"THE MATH INSPECTORS HAVE AN ANSWER!The series people are calling:Like Sherlock Holmes... but with calculatorsLike NCIS...but with milkshakes.Like Jurassic Park...but without the dinosaurs.Wait, what?Each book in this insanely popular mystery & detective series is designed to draw readers aged 9-12 into a mystery so intriguing, with characters so smart and funny, that they forget they're doing math.Because the Math Inspectors know two things. First, math is the greatest thing in the world. Second, crime solving is nothing more than a word problem. And they eat word problems for breakfast!

Bonus: Funny word problems at the end of the book for kids who want to sharpen their own Math skills.~PRAISE FOR THE MATH INSPECTORS:-"I thought this was going to be a sneaky way for me to get them to get some "math" worked into their reading. Turns out, I didn't have to be sneaky at all. My 9 and 10 year old both loved these books." Amazon Customer- “It made sense to my daughter and helped put the math she does on worksheets into perspective and gave her a real world use for math.” Amazon Customer~CRITICISM FOR THE MATH INSPECTORS:- “People who like math as much as the Math Inspectors do need to find another hobby. Like English, for example.” Polly Partridge, leader of the Ravensburg English Club and avowed enemy of the Math Inspectors.- “Do you have any idea how much trouble the four of you are in?” Officer Bobby Evans, Ravensburg Police Department.