Lance Rubin and I talk about his background as an actor and improvisational comedian and what that experience brings to his new young adult novel, CRYING LAUGHING. We discuss the new Snapchat series based on his book, DENTON LITTLE’S DEATHDATE, as well as his recording of his own audiobook. And we make time to palaver about politics, flying saucers, writing about grief, and THE BRIDGES OF MADISON COUNTY.

Lance Rubin is the writer of the DENTON LITTLE books (now a Snapchat original series) and CRYING LAUGHING. He also co-wrote THE LOST CAUSES OF BLEAK CREEK with Rhett and Link and the Off-Broadway musical BROADWAY BOUNTY HUNTER with Joe Iconis and Jason SweetTooth Williams.

Lance loves Harry Potter, the Knicks, Elizabeth Warren, Pod Save America, and Back to the Future. He lives in Brooklyn with his wife Katie Schorr and their young kids. Learn more at lancerubin.com and follow him on twitter/instagram @lancerubinparty. 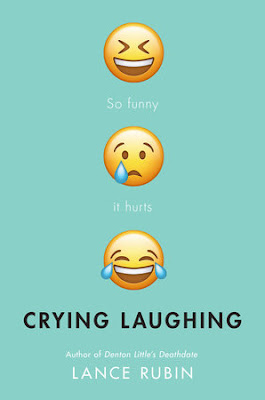 The author of Denton Little's Deathdate gives us a tragicomic story of bad dates, bad news, bad performances, and one girl's determination to find the funny in high school.

Winnie Friedman has been waiting for the world to catch on to what she already knows: she's hilarious.

It might be a long wait, though. After bombing a stand-up set at her own bat mitzvah, Winnie has kept her jokes to herself. Well, to herself and her dad, a former comedian and her inspiration.

Then, on the second day of tenth grade, the funniest guy in school actually laughs at a comment she makes in the lunch line and asks her to join the improv troupe. Maybe he's even . . . flirting?

Just when Winnie's ready to say yes to comedy again, her father reveals that he's been diagnosed with ALS. That is . . . not funny. Her dad's still making jokes, though, which feels like a good thing. And Winnie's prepared to be his straight man if that's what he wants. But is it what he needs?

Caught up in a spiral of epically bad dates, bad news, and bad performances, Winnie's struggling to see the humor in it all. But finding a way to laugh is exactly what will see her through.

LanceRubin.com
Posted by middle grade ninja at 8:24 AM