Middle Grade Ninja is available on Soundcloud, Stitcher, itunes, Podbean, Podblaster, RadioPublic, blubrry, Listen Notes, Google Play, and many other fine locations.
Daniel Kraus and I discuss his newest book, THEY THREW US AWAY, a wonderfully dark middle grade novel written by an author of horror. We get along famously. We talk briefly about prequel possibilities for THE SHAPE OF WATER and at length about his collaboration with George Romero on THE LIVING DEAD. We also chat about plotting, the benefits of working on multiple projects at once, creating consistent rules for a fantasy world, the importance of writing without an audience, how to write dark children’s stories without being too dark, and so much more. 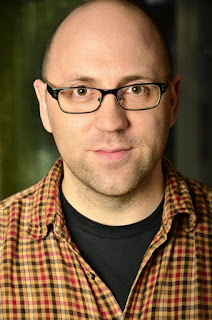 DANIEL KRAUS is a New York Times bestselling author. With Guillermo del Toro, he co-authored THE SHAPE OF WATER, based on the same idea the two created for the Oscar-winning film. Also with del Toro, Kraus co-authored TROLLHUNTERS, which was adapted into the Emmy-winning Netflix series. Kraus's THE DEATH AND LIFE OF ZEBULON FINCH was named one of Entertainment Weekly's Top 10 Books of the Year, and he has won two Odyssey Awards (for both ROTTERS and SCOWLER) and has been a Library Guild selection, YALSA Best Fiction for Young Adults, Bram Stoker finalist, and more.His newest books are THEY THREW US AWAY and THE LIVING DEAD, a posthumous collaboration with legendary filmmaker George A. Romero. Kraus's work has been translated into over 25 languages. He lives with his wife in Chicago. Visit him at danielkraus.com. 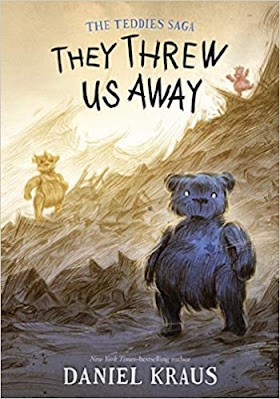 Buddy wakes up in the middle of a garbage dump, filled with a certain awareness: he’s a teddy bear; he spent time at a Store waiting for his future to begin; and he is meant for the loving arms of a child. Now he knows one more thing: Something has gone terribly wrong.

Soon he finds other discarded teddies―Horace, Sugar, Sunny, and Reginald. Though they aren’t sure how their luck soured, they all agree that they need to get back to the Store if they’re ever to fulfill their destinies. So, they embark on a perilous trek across the dump and into the outer world. With ravenous rats, screeching gulls, and a menacing world in front of them, the teddies will need to overcome insurmountable challenges to find their way home.

Equal parts Toy Story and Lord of the Flies, They Threw Us Away is the unforgettable start of a captivating series.
DanielKraus.com
Posted by middle grade ninja at 11:52 AM

Email ThisBlogThis!Share to TwitterShare to FacebookShare to Pinterest
Labels: Daniel Kraus, Interview, Podcast, The Shape of Water, They Threw Us Away