Middle Grade Ninja is available on Soundcloud, Stitcher, itunes, Podbean, Podblaster, RadioPublic, blubrry, Listen Notes, Google Play, and many other fine locations.
To commemorate the 76th anniversary of the bombing of Hiroshima, Kathleen Burkinshaw and I discuss her novel, THE LAST CHERRY BLOSSOM. This is one of the most important conversations I’ve ever had and I’ll be thinking about it for the rest of my life. Parts of it broke my heart and may break yours as well. You will hear my most awkward, deflecting nervous laughter as this is the first time I’ve ever been moved to tears on the show. But this talk is also uplifting and will change the way you view writing. And we genuinely laugh a lot and there’s an excellent ghost story near the end, so it won’t be all solemn. Don’t miss this conversation and share it with everyone you know.
As promised, here’s a link to a YouTube video of “Who’s Minding the Nukes” from 60 minutes: https://www.youtube.com/watch?v=nJdsIzjzVuA&t=1s 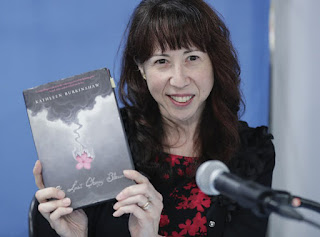 Kathleen Burkinshaw is a Japanese American author, the daughter of a Hiroshima survivor and resides in Charlotte, NC. She's a wife, mom, and owns a dog who thinks she's a kitchen ninja. In 2019 she spoke about her mother's experience in Hiroshima at the United Nations (NYC). This summer she spoke at UN worldwide virtual events as well as a Japanese American National Museum webinar with author Naomi Hirahara in honor of the 75th anniversary of atomic bombing.Kathleen has been featured on PBS, local NPR stations, Asian American magazines/newspapers, both Japanese and English programs on NHK World Japan, as well as in 2 major Japanese newspapers. She has presented to middle/high schools around the world for the past 10 years. Writing gives her an outlet for her daily struggle with chronic pain from Reflex Sympathetic Dystrophy.Her MG/YA historical fiction, THE LAST CHERRY BLOSSOM, is now a United Nations Office for Disarmament Affairs Resource for Teachers and Students and has been used in classrooms around the world. The trade paperback came out in August 2020 (available wherever books are sold and through Scholastic WNDB Reading Club). THE LAST CHERRY BLOSSOM has been nominated for 2019 NC School Library Media Association YA book award,2019-2020 Volunteer State Book Award (Tennessee), 2018& 2016 Scholastic WNDB Reading Club selection, and Finalist for NC Sir Walter Raleigh Fiction Award, the 2018 Sakura Medal, Japan, and the SCBWI Crystal Kite Award(southeast region),Represented by Anna Olswanger, Olswanger Literary. 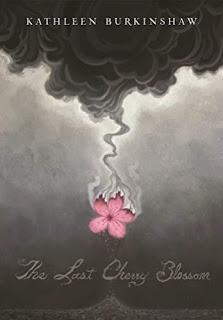 Yuriko was happy growing up in Hiroshima when it was just her and Papa. But her aunt Kimiko and her cousin Genji are living with them now, and the family is only getting bigger with talk of a double marriage! And while things are changing at home, the world beyond their doors is even more unpredictable. World War II is coming to an end, and since the Japanese newspapers don't report lost battles, the Japanese people are not entirely certain of where Japan stands. Yuriko is used to the sirens and the air-raid drills, but things start to feel more real when the neighbors who have left to fight stop coming home. When the bombs hit Hiroshima, it's through Yuriko's twelve-year-old eyes that we witness the devastation and horror.This is a story that offers young readers insight into how children lived during the war, while also introducing them to Japanese culture-something not done before. Based on author Kathleen Burkinshaw's mother's firsthand experience surviving the atomic bombing of Hiroshima, The Last Cherry Blossom hopes to warn readers of the immense damage nuclear war can bring, while reminding them that the "enemy" in any war is often not so different from ourselves.
KathleenBurkinshaw.com
Posted by middle grade ninja at 9:23 AM