James Riley and I have an in-depth discussion about his writing and plotting process for his new middle grade series, ONCE UPON ANOTHER TIME. We talk about writing in fairy tale worlds and the way pop culture knowledge permeates our collective creativity. We also chat about Batman, Star Wars, Alan Moore, working for Disney, the darker side of capitalism, a letter from Piers Anthony, and so much more.

James Riley is the New York Times bestselling author of the HALF UPON A TIME series, the STORY THIEVES series, the REVENGE OF MAGIC series, and the new ONCE UPON ANOTHER TIME series. Contrary to what previous biographies have stated, he is a) real and b) not the character Nobody from his STORY THIEVES books. Where would people even get that idea? (Spoiler: From him. He totally made it sound like he really was Nobody. He thought it’d be funny. We’re sorry.) He was born in Connecticut, where he lived for only a short time before moving to … well, quite a few states. He currently lives in Northern Virginia, outside of Washington, D.C., because that’s where his cats are. He has three of them. Other people think that’s a bit much. 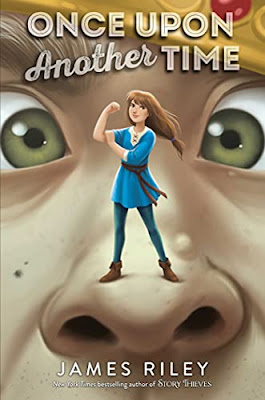 Storybook characters collide in this first book in a new trilogy of twisted fairy tales from New York Times bestselling author James Riley, set in the world of his popular Half Upon a Time series—perfect for fans of Fablehaven and Chris Colfer’s A Tale of Magic series!Five and a half feet might seem pretty tall for a twelve-year-old, but it’s not when your parents are giants. Lena has kept the fact that she’s a tiny giant secret, using magic to grow when out in the giant village. But hiding who she is has always felt wrong, even though she knows the other giants might not accept her. Fortunately, Lena has friends down in the Cursed City who understand that looking different doesn’t make her less of a giant.Someone who knows not to judge by appearances is Jin, a young genie currently serving one thousand and thirty-eight years of genie training that requires him to fulfill the wish of whoever holds his magical ring. In Jin’s case, it’s the power-hungry Golden King. At least the king only has two wishes left, one of which is for Jin to go to the Cursed City and capture its protector, the Last Knight—one of Lena’s closest friends.What Lena and Jin don’t know is how close the Golden King’s plans are to coming together, between his dark magic and his horrible Faceless knights. If Jin does find the Last Knight and bring him to the Golden King, why, that could doom the entire fairy-tale world.…This sounds like it’ll end badly, doesn’t it?
JamesRileyAuthor.com
Posted by middle grade ninja at 8:55 AM

Email ThisBlogThis!Share to TwitterShare to FacebookShare to Pinterest
Labels: HALF UPON A TIME, Interview, JAMES RILEY, Middle Grade, ONCE UPON ANOTHER TIME, Podcast, REVENGE OF MAGIC, STORY THIEVES