Erin Bow shares stories about winning the TD Canadian Children’s Literature Award with her debut novel, working at the CERN laboratory, being a science writer for the Perimeter Institute for Theoretical Physics, and having just won the Governor General’s Award. I impress her with my knowledge of RICK AND MORTY and TINY TOONS. We have a wonderful conversation about writing for spite, transhumanism, her writing shed, a creepy cabin story, a fear of squandering talent, the joy of winning awards, and so much more.

Erin Bow is a former physicist who currently writes speculative fiction young adult novels. She studied particle physics in college, eventually working at the CERN laboratory near Geneva, Switzerland. She then decided to leave science in order to concentrate on her love of writing.  Originally from Nebraska, Bow came to Canada in 1997. She is the author of the YA novels Plain Kate, The Scorpion Rules, The Swan Riders and Sorrow's Knot. Plain Kate won the TD Canadian Children's Literature Award in 2011. Bow has also written poetry under her maiden name Erin Noteboom. 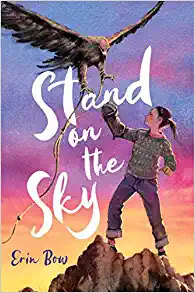 An exquisitely written, uplifting middle grade debut by acclaimed author, Erin Bow, about a young girl who defies her family’s expectations in order to save her brother and become an eagle hunter, perfect for fans of PAX.

It goes against all tradition for Aisulu to train an eagle, for among the Kazakh nomads, only men can fly them. But everything changes when Aisulu discovers that her brother, Serik, has been concealing a bad limp that risks not just his future as the family's leader, but his life too.

When her parents leave to seek a cure for Serik in a distant hospital, Aisulu finds herself living with her intimidating uncle and strange auntie—and secretly caring for an orphaned baby eagle. To save her brother and keep her family from having to leave their nomadic life behind forever, Aisulu must earn her eagle’s trust and fight for her right to soar.  Along the way, she discovers that family are people who choose each other, home is a place you build, and hope is a thing with feathers.

Erin Bow’s lyrical middle grade debut is perfect for fans of original animal-friendship stories like Pax and Because of Winn Dixie.

ErinBow.com
Posted by middle grade ninja at 8:43 AM