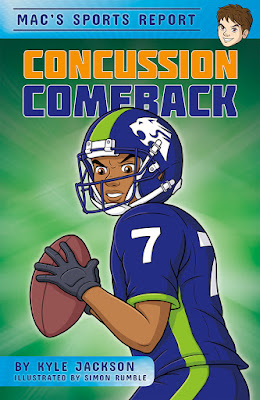 The first thing you need to know about Jolly Fish Press’new middle grade series, Mac’s Sports Report,is that it’s all about sports. The four books are loaded with action-packed athletic drama. Concussion Comeback is a football book. Sideline Pressure is a basketball story. Racket Rumors takes place on the tennis court. Back on Track takes place—you guessed it—on the track.

The second thing you need to know about Mac’s Sports Report is that it’s not just for people who play sports. It’s for people who like to watch and read and talk about them.

The hero of the stories is Stuart “Mac” McKenzie, who is both a great athlete and an excellent middle school sports reporter. Each book has Mac following—and writing about—different athletes at his school. These athletes deal with conflict on and off the court. If you’ve ever wanted to work for ESPN, these books are for you.

There are many other things worth knowing about Mac. He’s a brother, a son, a friend, and a teammate. He’s brave and smart and competitive. Did I mention he’s a great athlete? Probably, but it’s worth repeating. Mac can flat-out ball. He’s the best shooter on his basketball team and probably in the whole league.

One other thing worth knowing about Mac is that he uses a wheelchair. This detail is not treated in the books as a big deal because, well, why would it be? It doesn’t prevent Mac from being a good brother, or reporter, or—honestly, I can’t say this enough—a jock. (Mac’s the Steph Curry of his basketball team.) 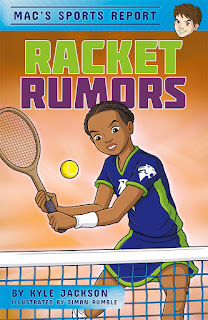 But then again, it was important that his chair isn’t treated as an afterthought. After all, it affects Mac’s life more than the color of his eyes or hair. To ignore the wheelchair completely would be to ignore Mac’s lived reality. It would be to render Mac’s life in some ways invisible. Yes, he’s the best basketball player in the school. But that doesn’t mean he plays on the school team. He plays on a district team with other middle schoolers who use wheelchairs. His games are as jam-packed with fast breaks, deep three-pointers,epic comebacks, and buzzer beaters as the games he covers as a reporter.

I guess what I’m trying to say is that Mac’s Sports Report isn’t about Mac’s wheelchair. But it is about Mac, an intrepid kid who doesn’t let anything—threatening parents, angry coaches, mysterious players, or his wheelchair—get in the way of a good story. 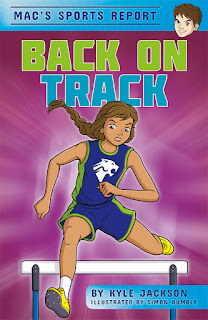 All four books in the Mac’s Sports Report series released September 1 with Jolly Fish Press, and are available in paperback and library bound hardcover, and as Ebooks.

Kyle Jackson loves to watch, play, and report on sports, just like Mac. 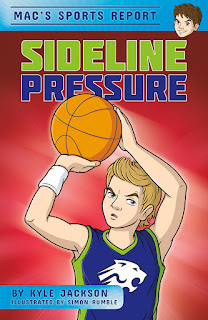