Aisha Saeed and I discuss her career and her newest middle grade novel OMAR RISING, a companion novel to AMAL UNBOUND. We chat about the difficulty she had submitting to traditional publishers and how that led her to seek out other diverse authors and the founding of WE NEED DIVERSE BOOKS, which is a movement that gives us hope even when the world seems disparaging at times. We also talk about the pressure of writing about Wonder Woman in DIANA AND THE ISLAND OF NO RETURN, advocating for children in education and as a writer, Unsolved Mysteries, flying saucers, and so much more.

Aisha Saeed is an award-winning and New York Times bestselling author of books for children. Her books, including the middle grade novel Amal Unbound (Penguin), the young adult novel Yes No Maybe So (co-written with Becky Albertalli), and the anthology Once Upon Eid (co-edited with S.K. Ali) received multiple starred reviews. Amal Unbound was selected as a Global Read Aloud for 2018 and was the winner of the South Asian book award. Her picture book, Bilal Cooks Daal (Simon and Schuster) received an APALA honor. Aisha is also a founding member of the nonprofit We Need Diverse Books™.  She lives in Atlanta, Georgia with her family. You can find her on Twitter and Instagram via @aishacs. 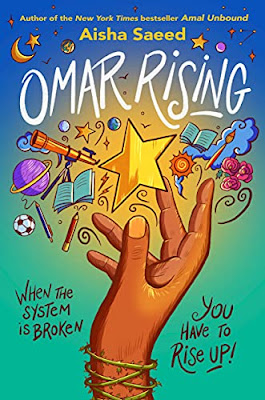 “Irresistibly appealing and genuinely inspiring—a story that helps us to see the world more clearly, and to see ourselves as powerful enough to change it.” —Rebecca Stead, author of Newbery Award Winner When You Reach MeIn this compelling companion to New York Times bestseller Amal Unbound, Amal's friend Omar must contend with being treated like a second-class citizen when he gets a scholarship to an elite boarding school.Omar knows his scholarship to Ghalib Academy Boarding School is a game changer, providing him—the son of a servant—with an opportunity to improve his station in life. He can't wait to experience all the school has to offer, especially science club and hopefully the soccer team; but when he arrives, his hopes are dashed. First-year scholarship students aren't allowed to join clubs or teams—and not only that, they have to earn their keep doing menial chores. At first Omar is dejected—but then he gets angry when he learns something even worse—the school deliberately "weeds out" kids like him by requiring them to get significantly higher grades than kids who can pay tuition, making it nearly impossible for scholarship students to graduate. It's a good thing that in his favorite class, he’s learned the importance of being stubbornly optimistic. So with the help of his tightknit new group of friends—and with the threat of expulsion looming over him—he sets out to do what seems impossible: change a rigged system.
AishaSaeed.com
Posted by middle grade ninja at 9:07 AM