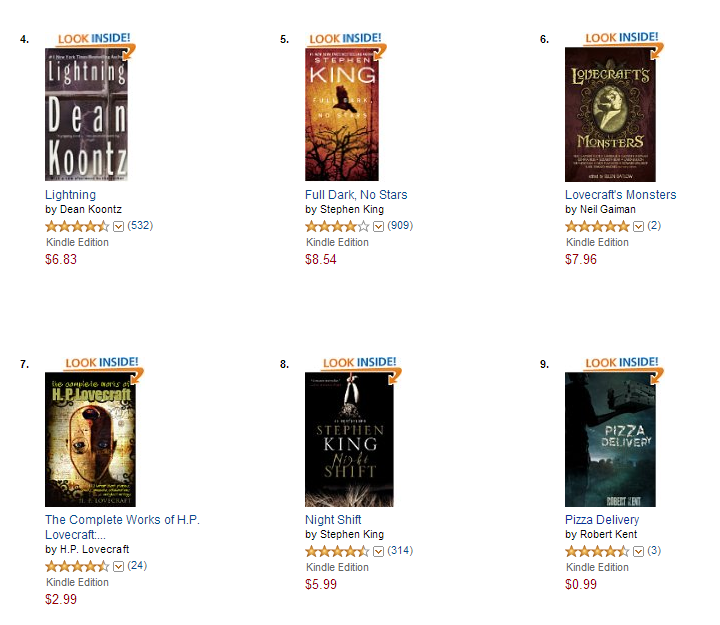 I'm feeling good today, Esteemed Reader. The snapshot above is from Amazon this morning.  If I could email it to myself ten years ago, I'd save a lot of dark moments of self doubt:) Not that there won't be some more of those yet to come as well as some mistakes and disappointments. But I'll deal with them then. Today, I'm smiling.

The snapshot doesn't mean so very much. Pizza Delivery is only available on Kindle and it's a much newer release and it's the cheapest book. If we add in print sales and we use a cumulative ranking and we adjust for talent and skill, I don't belong anywhere near those other gentlemen:) I'd gladly give up my spot in exchange for having any of those writers face the 7 Questions. More, if I hadn't discovered Stephen King as an adolescent and let him warp my little mind by reading everything he's ever published, much of it at least twice, I wouldn't have written Pizza Delivery in the first place.

My ego is inflated to an unhealthy degree this morning, but as a Stephen King fan, I am offended by the very idea of a comparison between our work. One of us is a master of American literature and one of us wrote a fun little story you can buy for less than a buck:)

Still, this image is a snapshot I'm putting in my scrapbook (which is actually this blog). I couldn't be happier with it if it were a picture of the actual Stephen King standing next to me at an author signing (his, obviously), though I would babble and try to tell him how It changed my life and our mutual love of The Dark Tower was one of the things that drew Mrs. Ninja and I together.

The reason I'm sharing this picture isn't just to brag nor to mark the occasion for a later time when I'm feeling less cheerful. I'm sharing this picture because this is and always has been a blog for writers. I am your Ninja, Esteemed Reader. When I snag an interview or I learn an insight into craft and/or publishing, I share it here. Because the writers I admire most give back to the writing community and this blog is my way of giving back.

I've shared with you my doubts, my fears, and some of my disappointments over the years, so why shouldn't I share this with you also? I've been keeping you abreast of my journey as an indie author so if you should decide to join me in the land of the published, you'll hopefully be better prepared than I've been. I read The Rusch Report and The Newbies Guide to Publishing to prepare myself and I can't recommend either strongly enough.

So what does this little picture above mean? It doesn't mean I've "made it." It doesn't mean it's time to quit my day job, though that ranking is coming with some nice extra cash with which to buy diapers. It doesn't mean I can let up one iota on my efforts to get more of my stories out (but it's important to enjoy these little milestones). It certainly doesn't mean I'm on any kind of level with those other writers who probably wouldn't make time to talk with me at a party I'm presently not invited to.

Except it kinda, sorta does mean that (the first part, not the bit about a party). I'm on one level with them: we're all of us for sale where anyone in the world can purchase us and since the whole world is potentially looking, I'm sure glad to be standing in such great company.

I've said it before and I'll say it again: there has never been a better time to be a writer. As I said last week, I don't care if you publish traditionally or independently. But know, Esteemed Reader, should you decide to try your hand at indie publishing, it is possible to reach the same readers as Stephen King. Probably not in the same numbers, it's true, but then again improbable is not impossible. After all, I'm not particularly special, I don't have a marketing machine behind me aside from Amazon, but that's my name next to my hero and that's certainly not nothing.

As I said when I decided to publish independently, if you write it, readers may come. That was and remains good enough for me.
Posted by middle grade ninja at 9:20 AM