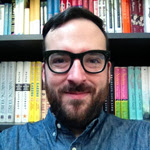 Jim McCarthy interned for DG and B while studying urban design at New York University. Upon graduating in 2002, Jim realized he would much rather continue working with books than make the jump (as he had originally intended) to the field of city planning. As an avid fiction reader, his interests encompass both literary and commercial works in the adult and young adult categories. He is particularly interested in literary women’s fiction, underrepresented voices, mysteries, romance, paranormal fiction, and anything unusual or unexpected. In addition to fiction he is also interested in narrative nonfiction, memoir, and paranormal nonfiction. Jim was raised just outside of NYC and currently lives in Manhattan.

It’s tough to call out three favorites. These are three that I read in high school and made me really fall in love with literature. So they’re more books that shaped and defined me as a reader than necessarily absolute all-time favorites. But they’re all genius and still move me deeply.

First and foremost, talent. Then kindness, tenacity, and drive.

I am always, always on the lookout for great sci-fi and fantasy from middle grade through adult. Non-Western based settings a plus. But I also would love to find exciting historical fiction and hook-y contemporary. And it’s hard to define exactly what I want in nonfiction, but I would love to find more narratives that open up the world a little wider—that can be in science or history or memoir or social justice. I just want stories that feel fresh and thrilling.

Nothing is better than the feeling of calling an author and telling them their first book has an offer. Being an integral part of making people’s dreams come true can’t be beaten.

The hardest part is the flip side of that: you get very emotionally invested in the lives and work of your clients, and not every book is a hit. So learning to roll with the punches and not take things personally/working to keep spirits up and keep driving forward is a constant journey.

I’ll leave this to much more capable hands: “If there's a book that you want to read, but it hasn't been written yet, then you must write it.” – Toni Morrison

J.D. Salinger. And you know what? I don’t even like his books. But if someone turns into a hermit and doesn’t reveal almost anything about themselves for several decades? Then I want to know more. So just the impossibility of it and the potential for secrets is too tantalizing for me to turn down.

dystel.com
Posted by middle grade ninja at 11:52 AM