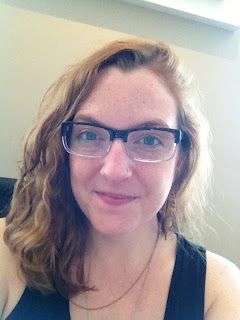 Logan joined the Gernert Company in 2010 after three years as an English and Musical Theatre teacher at Northern High School in Durham, North Carolina. A native of the South and a graduate of both the University of North Carolina at Chapel Hill and Duke University, she currently lives in Brooklyn and has a particular interest in fiction for young adults.

Ask me tomorrow and you’ll probably get a totally different answer out of me, but right now at this exact moment I would say Rebecca Stead’s WHEN YOU REACH ME, John Irving’s A PRAYER FOR OWEN MEANY, and SWAMPLANDIA! by Karen Russell. And BELOVED by Toni Morrison. And CLOUD ATL…ok, ok, I’ll stop cheating now.

Almost Famous is far and away my favorite movie. I’m stealing the other two movie spots to do a top five tv shows (which is still really difficult for me because television over the last decade or so has just been almost unbelievably amazing. Thanks, Sopranos!): Justified, The Wire, Misfits, Freaks and Geeks, and Battlestar Galactica.

Someone who understands that putting words on a page is just the first step in a lengthy process, and who loves (or at least tolerates with a lovely sense of humor) each of those steps along the way.

I’m always on the lookout to find any of the following written for young adults: a realistic thriller, a fantasy series, true science fiction, or anything with an interesting and engaging male narrator.

I love doing editorial work on manuscripts with enthusiastic and wildly talented authors. It’s so much fun, at times it’s hard to believe it counts as work. As for my least favorite thing, I imagine it’s every agent’s least favorite thing—the moment when you have to deliver bad news to a client.

Write what you know and what you love, and don’t try to force your words into a style just because it’s trendy or popular because that never ends well. Just trust yourself and have some patience!

Madeleine L’Engle. It would be incredible to just sit down with her and listen. She wrote many of the books that defined my childhood, but she also had a wisdom that extended far beyond her talents as an author.

Posted by middle grade ninja at 7:44 AM