Happy Halloween, Esteemed Audience! Dan Poblocki and I discuss the importance of writing horror novels for children such as his newest, TALES TO KEEP YOU UP AT NIGHT. We also talk about the craft of writing horror for younger readers and the fear some adults have of allowing children to think independently. Also, the subject of Dan having lived in multiple haunted houses while writing scary books comes up, so maybe listen to this conversation with the lights on. 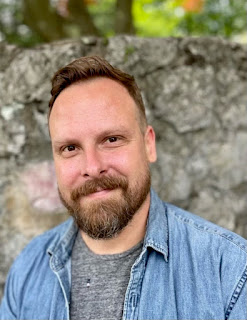 Dan Poblocki is an American author of mystery, horror, and adventure novels for young people. He is the co-author with Neil Patrick Harris of the #1 New York Times bestselling series The Magic Misfits (writing under the pen-name Alec Azam). He's also the author of The Stone Child, The Nightmarys, and the Mysterious Four series and many more. His books, The Ghost of Graylock and The Haunting of Gabriel Ashe, were Junior Library Guild selections and made the American Library Association’s Best Fiction for Young Adults list. His work has been translated into French, Greek, Russian, German, Polish, and Farsi.

Dan was born in Providence, Rhode Island. During his pre-teen years, his family moved to Basking Ridge, New Jersey, where he often looked for adventure with his best friends. Later, he graduated from Syracuse University with a degree in theater. Subsequently, he toured the United States playing ultra-challenging roles such as Ichabod Crane in The Legend of Sleepy Hollow and the Shoemaker in The Shoemaker and the Elves to packed houses filled with literally thousands of screaming children. (He hopes they weren’t screaming in fear.)

After that, he spent many hours as a traveling bathing-suit salesperson, an audience wrangler for a popular TV game show, a temp secretary, a floral assistant, and finally, a clinical admin and systems analyst at Memorial Sloan-Kettering Cancer Center in New York City. (EXCITING.) All the while, he was writing stories in his spare time (MORE EXCITING), often late into the night, and then early in the mornings, before the sun came up.

Dan now writes full time in Saugerties, NY where he lives with two scaredy cats in a creaky old house. He's probably working on something new this very minute! 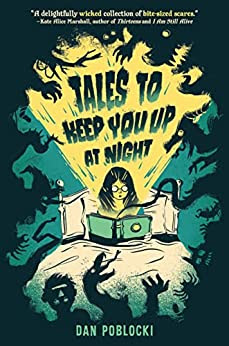 From the co-author of the #1 New York Times bestselling series The Magic Misfits comes a spectacularly creepy novel that will keep you up way past bedtime. Perfect for fans of Scary Stories to Tell in the Dark!"Grab a flashlight and a blanket—this lives up to its titular claim."— Kirkus ReviewsAmelia is cleaning out her grandmother's attic when she stumbles across a book: Tales to Keep You Up at Night. But when she goes to the library to return it, she's told that the book never belonged there. Curious, she starts to read the stories: tales of strange incidents in nearby towns, of journal entries chronicling endless, twisting pumpkin vines, birthday parties gone awry, and cursed tarot decks. And at the center of the stories lies a family of witches. And witches, she's told, can look like anyone...As elements from the stories begin to come to life around her, and their eerie connections become clear, Amelia begins to realize that she may be in a scary story of her own...With hair-raising, spine-chilling prose, Dan Poblocki delivers a collection of interconnected stories that, if you're anything like Amelia, is sure to keep you up late in the night.

Posted by middle grade ninja at 9:12 AM

Email ThisBlogThis!Share to TwitterShare to FacebookShare to Pinterest
Labels: Dan Poblocki, Horror, Interview, Tales to Keep You Up at Night