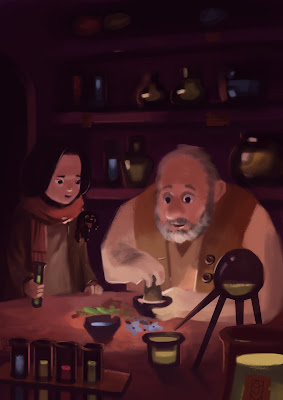 I didn’t really get into creative writing until after college, when I worked on an island full of monkeys (sorry, I’m not explaining that any further). Most writers boast that they’ve been writing ever since they were kids. Well good for them! I’m sure they are seasoned veterans when it comes to the struggle that is the creative process. For me, however, suffering through such a tiring evolution didn’t start until the summer of 2012, right before I began my MFA at age 29. It wasn’t until my second year in the program that I discovered the carrot that got me to where I am now:

I always keep trying, and as long as I do, give myself a break.

I didn’t begin actively working on my novel, The Alchemist’s Theorem, until the fall of 2013. It wasn’t even part of my thesis (a collection of nonfiction essays that I have lost interest in completely). Once I had set my mind to writing it, I was forced to figure out how to finish an entire book, something I had never done before.

Because the US government threw a ridiculous amount of pretend money at me (student loans), I got my own place that second year of grad school. It was a basement studio. Two obnoxious dogs lived above me and barked all the time. The wall next to my writing desk was shared with the bathroom of another studio. The man who lived there did not take good care of his bowels. But the biggest problem I had was the clingy, obsessive, unhealthy relationship I had with my beloved Xbox.

Early on, one of the dogs died, so things got quieter. I moved my desk to another wall in the apartment by a tiny window. I still occasionally heard my neighbor laughing at his own bathroom noises, but I was desensitized to it. And I finally set some boundaries with my inter-intelligence romance, and told my Xbox we could only see each other after 5:00 pm. These changes were all very helpful, but I didn’t exactly become a writing machine once they happened.

Years ago, when I began thinking about writing seriously, I did my research and asked questions of whomever would talk to me. People in the writing industry can be rather directive. I was constantly told I have to do this and I have to that, otherwise I shouldn’t bother. My knee-jerk reaction to these commands was always, “The hell I do!” I hate being told what to do. One of the directives I heard over and over was that I have to write at least 500 (sometimes it was 1000) words a day, no matter what, even if it was garbage. That one irritated me the most.

Between classes and my novel, I had plenty of good projects to work on, so I never stared at the wall with absolute blankness in my mind. I have endless universes in my head, enough to keep me busy for the rest of my life, so I am lucky in that regard. But I sucked at actually sitting down and putting words to the page. I told myself that yes I have to try and write every day. For the first couple of months there were many days where I didn’t write a single word, despite setting a goal each day. But instead of buckling under feelings of guilt, ineptitude, and despair, I gave myself a break, and said, “That’s OK. No big deal. Try again tomorrow.” As long as I was always trying, I didn’t worry about it.

I gradually began to have better days, writing more words more often. Eventually, I had great days where the words poured out of me. Because I kicked my addiction to my Xbox, I needed to be addicted to something, and due to those great days, I became addicted to writing. Over time, I got used to sitting down and writing for the joy of it, but it certainly didn’t happen naturally or overnight.

I still don’t write every day. What I do though is set broad deadlines, and I give myself the room to write in my own time in my own way. I use my strengths in my writing process. I love completing tasks. “To Do” lists are my favorite tool. It feels so good to check things off my list. I also love to multi-task, so I let myself jump around from one project to the next (so I don’t lose interest). And sleep is so important to me. That’s why I let myself wake up naturally, which is anywhere from 9-11:00 am (sometimes I wake up at 8:30 am, like a grownup). All of these things take the pressure off and let me enjoy the writing process. Sometimes I’ll go too long without writing, and that’s when I stop giving myself a break and I start getting on my case.

The most important thing I learned, though, was this: I don’t have to listen to other people, but I do have to practice my craft in order to get better, and what’s key is that I do it in a way that suits me best. What works for me won’t work for everyone. I think the creative process is all about the individual. Other people's’ directives don’t necessarily account for individual differences. So I say ignore them, and figure out what works best for you.

I finished The Alchemist’s Theorem: Sir Duffy’s Promise last August (2015), and ran a successful Kickstarter campaign. The rave reviews have been coming in from both readers and reviewers. I couldn’t be happier with the way this book turned out. It’s now available in print and digital ($2.99) forms via Amazon or The Seattle Book Company, and it can be ordered wholesale through Ingram and Baker & Taylor. This is the first book of a series, and I am currently working away on the next. I hope you enjoy the adventure! 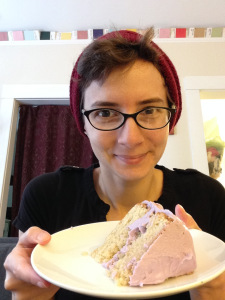 Margaret Chiavetta graduated from the University at Buffalo in 2005 with her BA degree in Anthropology. Afterward, she moved to Puerto Rico for a year where she spent the hot humid days following around free-range rhesus macaque monkeys. When the study finished, she went from one monkey job to the next, moving up and down the east coast for several years. Then she attempted a primatology graduate program in London, England, but soon developed an allergy to academia. Margaret dropped out and returned to the US and eventually went on to get her MFA in creative writing, graduating from the University of Washington Bothell in 2014. She lives in Seattle. 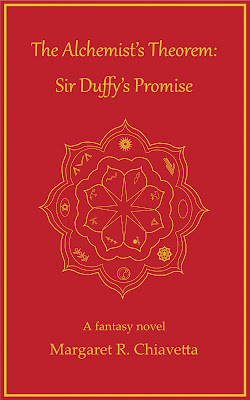 Mendel, an eccentric boy with an autistic nature, and the master alchemist Sir Duffy set out on a series of quests with their many weird and endearing creature companions like Esther the snake-ish gusselsnuff, and Gooder the fat, lazy, carnivorous horse. These determined travelers must venture across the continent of Terra Copia, an exotic land where the plants and animals in one forest are completely different from the next. It is up to them to safeguard secrets and dangerous artifacts from many enemies such as agents from the Academy of Advanced Disciplines, venomous pixies, and a mysterious pale stranger. If they fail, a terrifying curse will return to their land.

"Chiavetta employs a gale-force imagination in conjuring her alchemical realm... While immersed in this crowd-pleasing adventure, young readers should marvel at Chiavetta’s Alice in Wonderland vibe, and adults should appreciate the sweeping mythos.” —Kirkus Reviews

“The detailed botanical specimens and creatures of the “canny class” were very imaginative and well thought out… I thought the book a worthwhile read, and I would recommend it to those looking for a fantasy story set in a different world.”—Middle Shelf Magazine

"The strongest part of Chiavetta’s work is the world building: the world of Terra Copia is an interesting and thoroughly magical landscape to read about.” —BestFantasyBooks.com

"Chiavetta avoids showing autism as either an entirely crippling illness or a special gift in and of itself. Mendel has autism and he has to learn ways of coping with the world . . . It becomes one aspect of who he is, not the sole defining quality of an inquisitive and inventive young man.” —Fangirlnation

magrats.wordpress.com
Posted by middle grade ninja at 8:00 AM