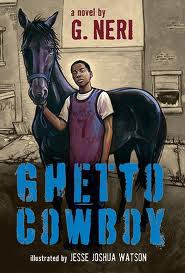 First Paragraph:We drivin’ into the sunset, the car burning up from the heat. I don’t know if it’s comin’ from outside or from Mama, who’s burning up angry at me. She ain’t said nothin’ to me since we left the principal’s office ’bout a hour ago. But she got her foot pressed on the gas like we in a race, zoomin’ past everyone on the expressway.

G. Neri will be here Thursday to face the 7 Questions.

God, I love this book! I know, I love all the books, Esteemed Reader, and next week I'll be telling you about another book I love. But I really, REALLY love this book. I love it so much I'm going to buy a copy for my nieces and nephews for Christmas (I'm the Uncle who buys books instead of toys and I regret nothing). I'm going to buy it for my white nephew and my black nephew and I'll bet they both love it as much as I do because a great story well told transcends race.

A brief aside: growing up white, I never noticed most the heroes in the books I read were white like me. Why wouldn't they be? But as an adult Ninja married to a black woman and planning a family, I've been combing books with a different mindset. What books will my kids read? Where are the books staring dark-skinned boys who go to wizarding school and tour chocolate factories?

But here, Esteemed Reader, is G. Neri and his new classic, Ghetto Cowboy. It's a gripping read for readers of any age, and if you're a writer working on your voice, Ghetto Cowboy is a book you definitely want to read as G. Neri is all about nailing the voice of his protagonist  Witness how he writes Cole (short for Coltrane, naturally) as a genuine character who says the things Cole would say the way he would say them (but without all the swearing I imagine he might include if this were YA instead of MG):

I don’t know why I stopped going to school. I guess I didn't wanna waste no more time with teachers and homework and all a that, ’cause what difference do it make in the end? I’ll never do nothing great in my life. Do they really think I’m gonna be like Obama? Not a chance. I just feel sorry for Mama for thinking that I could be somebody.

Writing in dialect is tricky, but so far as I can see Neri nails it. I'm not sure I can speak to authenticity. Having grown up in a small, all-white Indiana town where some folks to this day wear mullets, the Ninja is exactly as streetwise as you might imagine (best I stick to towns). But I believed in Cole as a character and I felt it was him, not Neri, speaking to me.

Some might argue that the prose in a middle grade novel should be correct, regardless of subject or character, as it's being read by impressionable young minds. Bah! I say. Impressionable young minds want a good story well told, and "a couple of" is not the same as "coupla." Cole wouldn't say the first version and the if he did, he'd cease to be Cole. Readers, especially younger readers, would pick up on the lie. Neri wouldn't lose them all, but he'd lose some.

Our 12-year-old hero is headed for trouble. His Mama is at her wits end. And desperate times call for desperate measures, which is why the novel opens with Mama driving Cole straight to Philadelphia where he'll live with his dad, whom he's never met, and learn a little something about caring for horses and what it means to be a cowboy.

By the way, this is the best and greatest description of riding a horse for the first time I have ever read or will ever read as it immediately put an image in my mind I knew to be true:


It feels like I’m sitting on one of them giant walking machines in Star Wars.

So does Cole make up with his estranged father, learn the cowboy way, and start on the path to a brighter future? Esteemed Reader, I'm not going to tell you that! You'll have to read the book. So that's where we'll leave it. Ghetto Cowboy is a wonderful book destined to make a certain kind of white adult very nervous, and I like that about it.

Few things have made me laugh harder than watching uncomfortable white folks watching Mrs. Ninja and I during a screening of Django Unchained, because there are whole stretches of history they'd just as soon forget. But G. Neri isn't going to let them forget:

I swallow my food. “Look, you guys might think y’all is cowboys, but all I know is, real cowboys is white.”

The old man shakes his head, like I’m a fool. “Son, don’t you know black cowboys is a tradition that goes back to before the Civil War?”

He looks disappointed. “Not whatever, man. The word cowboy started as a black word. Wear it proudly.”

“So how come I never seen any black cowboys on TV then?”

He waves his hand. “TV. Humph. Can’t trust the media to tell the truth. The truth is, the white man always gets his way. Looky here. . . .”

He pulls out a book from a dusty shelf. It got pictures and drawings from a long time ago. He shows me some old black-and-white pictures of black dudes dressed in homemade clothes doing cowboy stuff — roping, riding, and cleaning horses.

No, but he just getting started. He points to a picture of a black cowboy riding a horse out in the wild. He got one of them cowboy rope things whirling in the air like he about to catch some bull. “That’s Bill Pickett, son of a slave and the most famous black cowboy of all. Back then, there was almost nine thousand black cowboys out West, working cattle and driving ’em up the Chisholm Trail and such. And these cowboys was so good that eventually, the whites took the name cowboy for themselves. Stole it, really. Now we’re just trying to take it back, is all.”

Ghetto Cowboy should be in every school and library in the country. If America is ever to move past racism, it's important to keep a dialogue going that acknowledges our nation's true history. It's just as important for all children to remember our history and Neri is keeping that dialogue moving.

That's one reason why I'm so glad to have posted this review at the beginning of February. This is the perfect month to share history with the children in your life (just watching Lincoln doesn't count). Here's a good place to get started.

More than being a history lesson, Ghetto Cowboy is a book about a universal truth: boys need fathers, if they can be got, and fathers need boys to need them. It's a good story, well told, and it's one refreshingly not quite like anything else I've read. Do yourself a favor, Esteemed Reader, pick up this book.

As always, I'll leave you with some of my favorite passages from Ghetto Cowboy:

Kids can be happy ’cause they don’t know better, but when you get older, well, you just know it’s all a big lie.

These houses is tall and skinny — only one room wide. But that’s just it, there’s one room — his room, which got a bed, a bathroom, and a closet. I look in the closet and see he pulled stuff outta it and put a blanket on the floor. Uh . . . no. I ain’t no Harry Potter. And I ain’t living in no closet. I got to think.

We head away from the court, passing over the expressway. Smush tells me they built that thing so white folks could drive right over the neighborhood without stopping.

He goes over to a record player sitting on a wood box, digs through a pile a records, and pulls one out. They look like giant black CDs.

I ask Harp about that, and he says every rider tries to make his horse special, kinda like trickin’ out a car. I look at Boo, and he ain’t got nothin’. Then I remember Mama’s bracelet in my pocket. I ask this kid CJ if he knows how to tie a knot. He nods, and I give him the bracelet. He ties it onto Boo’s hair and smiles. Bling.

Posted by middle grade ninja at 8:45 AM