Authors Josh Berk and Saundra Mitchell tell the terrifying tale of how they collaborated to write CAMP MURDERFACE. We talk about how they met, tips for working on a project with another author, the importance of being dumpster rat-y, finding time to write (even while sleeping), being a phone psychic, launching a book during the quarantine for COVID-19, an actual ghost story, and so much more.

Saundra Mitchell has been a phone psychic, a car salesperson, a denture-deliverer and a layout waxer. She’s dodged trains, endured basic training, and hitchhiked from Montana to California. The author of nearly twenty books for tweens and teens, Mitchell’s work includes SHADOWED SUMMER, THE VESPERTINE series, ALL THE THINGS WE DO IN THE DARK, a novel forthcoming from HarperTEEN and the forthcoming CAMP MURDERFACE series with Josh Berk. She is the editor of three anthologies for teens, DEFY THE DARK, ALL OUT and OUT NOW. She always picks truth; dares are too easy. 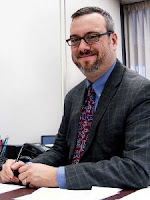 Josh Berk is the author of the teen novels THE DARK DAYS OF HAMBURGER HALPIN (named a best book for teens of 2010 by Kirkus Reviews and Amazon.com) and GUY LANGMAN: CRIME SCENE PROSCRASTINATOR (2012) as well as the middle grade mysteries STRIKE THREE YOU'RE DEAD and SAY IT AIN'T SO. 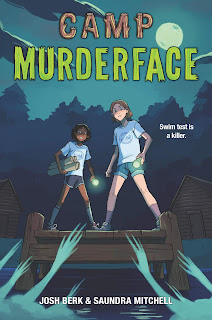 Camp Sweetwater is finally reopening, three decades after it mysteriously shut down. Campers Corryn Quinn and Tez Jones have each had more than enough of their regular lives—they’re so ready to take their summer at Sweetwater by storm.

But before they can so much as toast one marshmallow, strange happenings start…happening. Can they survive the summer? Or will Camp Sweetwater shut down for good this time—with them inside?

Posted by middle grade ninja at 9:29 AM