Chris Negron and I discuss how he became an author, how his Parkinson’s disease makes him a better writer, and his newest book, THE LAST SUPER CHEF. We wonder if writers ever actually retire and how learning alternate titles of great works might forever change them. We chat about choosing an audiobook narrator, the Atlanta writers club, UFO disclosure, episodic storytelling, politics in fiction, the importance of trusting your reader, and so much more.

Chris Negron is the author of Dan Unmasked, his debut novel released in July, 2020, and The Last Super Chef, coming July, 2021. Both contemporary middle grade novels are published by HarperCollins. KitLitExchange.com says Dan Unmasked “broke my heart” and “needs to be on every library shelf.” Chris grew up outside Buffalo, New York and attended Yale University. His short fiction has appeared in numerous literary journals, with one piece longlisted for the Top (Very) Short Fictions of 2016 by Wigleaf.com. If you spot him in the wild, it’s probably in a comic book shop, which also explains a large portion of Dan Unmasked‘s plot. He lives in Atlanta with his wife, and his writing is represented by Alyssa Jennette at Stonesong. 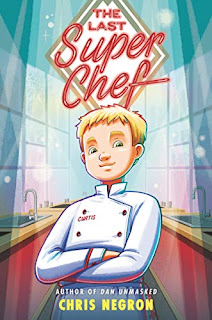 Family and food take center stage in this heartfelt middle grade story perfect for fans of John David Anderson and Antony John.
For as long as he can remember, Curtis Pith has been obsessed with becoming a chef like Lucas Taylor, host of Super Chef. And Curtis has a secret: Taylor is actually his long-absent father.
So when Taylor announces a kids-only season of Super Chef, Curtis finally sees his chance to meet his dad. But after Curtis wins a spot in the competition and arrives in New York to film the show, nothing goes as smoothly as he expected.
It’s all riding on the last challenge. If Curtis cooks his heart out like he knows he can, he just might go home with the top prize—and the truth.

Posted by middle grade ninja at 8:51 AM