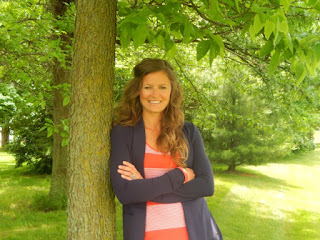 Laura Martin believes in chasing her dreams and she brought that philosophy to her classroom for six years as a seventh grade English teacher.  Edge of Extinction-The Ark Plan is Laura’s first novel—and a dream come true. When she isn’t writing stories about dinosaurs and underground civilizations, she can be found in the Indianapolis area with her dashing husband, Josh, her adorable kids, daughter London and son Lincoln, and two opinionated bulldogs.

Click here to read my review of Edge of Extinction-The Ark Plan.

Harry Potter will always and forever have my heart, so I’m going to cheat and count the entire series as one book. The second would have to be The Song of the Lioness Quartet by Tamora Peirce. I devoured those books over and over as a kid. Pretty much everything she’s ever written has a permanent spot on my shelf and in my heart. And finally The Time Traveler’s Wife by Audrey Niffennegger.

Not enough? I have two little kiddos at home, so free time is something that I vaguely remember. I write after my kids go to bed at seven at night, and I keep writing until my eyes won’t stay open anymore. Sometimes that’s a few hours…sometimes that’s a few minutes. It all depends on the day and how much is left in the tank after a day of toddler wrangling. As far as reading goes, I do most of that through audiobooks. I always have one in rotation to listen to in the car or while I fold laundry, so the amount I listen to varies day to day.

Like a lot of life-long bookworms, I always dreamed about writing a book. While I was in the middle school trenches teaching seventh grade English, I set a goal to get published before I turned thirty. So, goal set, deadline approaching, I started writing a book. It was terrible, but it took over 150 rejections before that fact really sunk in. So I wrote another book, and that book ended up getting noticed by Alec Shane, who was working at Writer’s House as Jodi Reamer’s assistant at the time. He asked me to do a huge revision and rewrite on the book before he showed it to Jodi, with no promises or guarantees attached, and I jumped at the chance. (I’d submitted my book to Jodi in the same way one applies to Harvard…with a lot of prayers but not much hope.)  It took a year from the time Alec first noticed my book to the day that I got the phone call that Jodi was interested in representing me. My daughter was only two weeks old when she called, and I was a little worried that it was all one big sleep-deprived dream. The book, which at the time was just called The Ark Plan, sold to HarperCollins who asked me to turn it into a two book series.

I believe writer’s are born, but it is the teaching they receive the books they encounter that determines whether or not they actually become a writer. I think to be a writer you have to first fall head over heels in love with books and the magic they hold between their pages. I fell in love with books via The Chronicles of Narnia in second grade, but I firmly believe that the real reason that I am a writer today is because I grew up listening to books, not reading them. I started training for cross country in middle schol, and I discovered that a six mile run was bearable if I was listening to Jim Dale narrate the Harry Potter series, and if you look the science behind what makes a writer, you will discover huge ties between listening to books and becoming a writer.

I love that it’s never felt like work. When I get to delve into a story I’m working on, it’s fun. And I guess it’s that simple. I’ve been able to make my passion into a paycheck, and even when I’m exhausted after a long day of keeping two small children alive and happy, writing is a soft place to land. My least favorite thing about writing is the sedentariness of it. I love to be up and moving, preferably while multi-tasking. Spending hours sitting in front of a computer screen starts to get to me after a while. Which is why I guess it’s lucky that I rarely get more than an hour or two after my kids go to bed for the night!

My first would be to write a book, and even though you are going to think it’s bestseller material, shove it under your bed and write another one. Always have something new and exciting in the pipeline so that as you are getting all those lovely rejection emails, you won’t lose hope.

My second piece of advice would be to set a deadline on your dream. Mine was to get published before I turned thirty (I missed this goal by about nine months), but really, even if it had taken me until I was one hundred, it still would have been worth it. A lifetime spent pursuing a dream, even a dream that is never realized, is better than a life spent with regrets. Once you set a tangible deadline you will be forced to take the steps to make it happen. And lastly, turn off the internet when you write and move your phone to another room.

It’s a hard choice between Tamora Pierce and J.K. Rowling, but if push came to shove I’d have to say Tamora Pierce. I love everything about her writing, and if I could live in the worlds she creates, I’d pack my bags tomorrow.


LauraMartinBooks.com
Posted by middle grade ninja at 7:52 AM