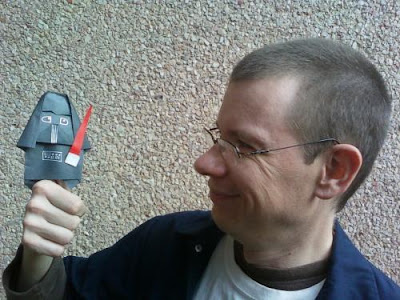 He is the bestselling author of The Strange Case of Origami Yoda, which won the 2010 E. B. White Read Aloud Award for middle readers, Darth Paper Strikes Back, and Horton Halfpott, which Kirkus dubbed “a romp from start to finish.” He lives in Christiansburg, Virginia, with his wife, author and illustrator Cece Bell.

Click here to read my review of The Strange Case of Origami Yoda.


Question Six: How much time do you spend each week writing? Reading?
Hardly any time writing. My "job" of being a writer is really about travelling around, running a website, answering emails and stuff like that.

LOTS of time reading! I love to read! Right now I am in the middle of Splendors and Glooms! EEK! Don't tell me how it ends!


Question Four: Do you believe writers are born, taught or both? Which was true for you?
Born! I have Aspergers and I think it's a crucial part of my being a writer. My brain is wired differently. The OFF switch on words doesn't work. So I used to run my mouth all the time. When I finally learned to let some of those words come out on paper or a computer screen, I discovered that what had been a FLAW was actually my SuperPower!

Least favorite thing: revising. But it must be done! MUST!


Question Two: What one bit of wisdom would you impart to an aspiring writer? (feel free to include as many other bits of wisdom as you like)
When you're done, you're not done.Whatever you just wrote could be better.

Often stuff is so clear in my head that I don't see the need to explain it fully in writing. Then someone else reads it and it makes no sense or -- even worse!-- they think I meant something else!


Question One: If you could have lunch with any writer, living or dead, who would it be? Why?
Charles Dickens. He is a favorite writer, he directly inspired my book Horton Halfpott and he died before he finished his last book. I'd like to ask him how it was supposed to end!

Posted by middle grade ninja at 8:55 AM