Middle Grade Ninja is available on Soundcloud, Stitcher, itunes, Podbean, Podblaster, RadioPublic, blubrry, Listen Notes, Google Play, and many other fine locations.
John Gallagher and I nerd out about comics, action figures, Batman and all the best things in life, including his new comic book-ish novel, MAX MEOW: CAT CRUSADER. We also talk about his role as art director for RANGER RICK MAGAZINE, our mutual childhood dreams of being Robin, outlining while leaving room for fun, the importance of creating fast, launching a book series during a pandemic, the importance of a meatball from space, a possible ghost story, and so much more. 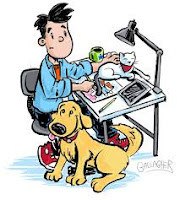 John Gallagher is the art director of the NWF’s “Ranger Rick” magazine, cofounder of “Kids Love Comics” (an organization that uses graphic novels to promote literacy), and leads workshops teaching kids how to create their own comics. John lives in Virginia with his wife and their three kids. Visit him at MaxMeow.Com, on twitter @johnBGallagher, on facebook @MaxMeowCatCrusader and on instagram @johngallagher_cartoonist. 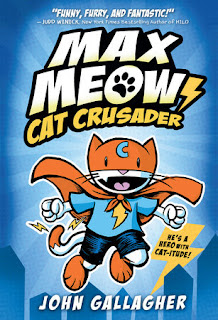 Meet a secret superhero with CAT-ITUDE–Max Meow, Cat Crusader–in this purr-fectly awesome, hiss-sterically funny new graphic novel series!
Max is just a regular cat in Kittyopolis, trying to make it big as a podcaster UNTIL he accidentally takes a bite of an RADIOACTIVE SPACE MEATBALL at his best friend, scientist Mindy’s, SECRET LAB. Then before you can say MEOWZA, Max becomes…(drum roll!)…The CAT CRUSADER! Being a super hero is fun (Super strength? Check! Flying? YES!!!)–but not if you get so cocky, you forget your best friend! Will Max learn to listen? Will he and Mindy make up? And together, can Max and Mindy save Kittyopolis from the evil Agent M and BIG BOSS?! Find out in Max Meow: Cat Crusader-a laugh out loud, furr-ociously funny, action-packed new series filled with so many twists, turns, and terrific jokes it makes bad guys FLEA and kids cheer with glee! BONUS: Includes how to draw Max Meow!
“Funny, furry and fantastic!” —Judd Winick, New York Times Bestselling Creator of the Hilo series
“Max Meow’s super heroics will have kids meow-ling with laughter!” –John Patrick Green, creator of the InvestiGators series
MaxMeow.com
Posted by middle grade ninja at 8:05 AM