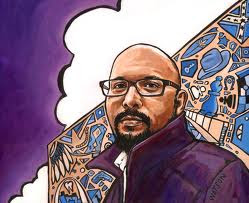 G. Neri is the 2011 Coretta Scott King Honor-winning author of Yummy, and a two-time American Library Association Notable Book honoree. In 2010, he was the recipient of the Lee Bennett Hopkins/ International Reading Association Promising Poet Award for Chess Rumble. He has been a filmmaker, animator and new media producer and one of the founding members of The Truth anti-smoking campaign for teens. He lives on the Gulf coast of Florida with his wife and daughter and likes to troll for alligators.

His other works include the middle grade novels Chess Rumble and Ghetto Cowboy, as well as the young adult novel, Surf Mules.

Click here to read my review of Ghetto Cowboy, which was a 2012 ALA Odyssey Honor winner and won the Horace Mann Upstanders Award.

Elizabeth Bird, a School Library Journal blogger, summed up Neri's approach by saying, "Maybe part of the reason I like Greg Neri so much is that he’s not afraid to be as “urban” as “urban” can be. He writes in dialect, sets his stories in cities, talk about gangs and other contemporary issues, and produces stories that no one else is telling. That no one else is even attempting to tell. Because if there’s one thing Neri does well it’s tell a tale that needs to be told."

The Phantom Tollbooth by Norton Juster made me a reader. The Juggler of our Lady by R.O. Blechman turned me onto the idea of making books, and that there's a power and beauty in simplicity. And an adult novel, Ask the Dust by John Fante made me a writer: the writing was stripped down, funny, raw and honest. It blew my mind and made me think that I didn't have to be all high fallutin' to write. Just keep it real.

Depends what I am working on and what phase it's in. If it’s a first draft, I might write 2-6 pages a day. Either way, I am at my desk from 9-3pm, at least: revising or researching or doing all the business side of writing.

Reading, I'll go on torrential tears and epic draughts. But I always have a pile of at least 7 books waiting to be read. Mostly non-fiction and graphic novels.

So many paths. Early on, I did an animated film called A Picasso on the Beach and when I stumbled upon Blechman's book, I thought, hey, this could be a book. And on a whim I did it and showed it to a friend of a friend who had a small imprint in California and he bought it. Unfortunately, it never came out. A bit later, I started illustrating little books for my amusement and on a whim, I wanted to see if I was good enough to get an illustration gig and a few weeks later, I was hired by Scholastic to do an easy reader. But the real battle came as a writer. I'd written a film script that became a Sundance Lab finalist but I kept backing away from making it into a film because something wasn't right. Turned out it was the wrong medium for the story. I came across a script a friend wrote for a graphic novel and something clicked in my head that my story should be a graphic novel. Everything fell into place and I was turned onto Lee and Low Books through a friend that won their First Voice contest and boom, they bought it. That was a book called YUMMY. Then my editor had  a dream project she'd always wanted to do about inner city chess and I thought to myself: I can do that. If I can come up with an idea, she make it. And she did. That became CHESS RUMBLE.

I believe people become writers. Yes, some dreamed of it since they were a kid but for me, I didn't start writing for real till I was 40. I never dreamed of being a writer or thought that it was something I could possibly do. I was a story teller who had used film and painting and animation and photography to tell stories. Books became a natural extension of that. The stories I wanted to tell worked best in that medium. I had never written a novel or a graphic novel or poetry. But that's what the stories demanded and I am in the service of my stories, so that's what I did.

Favorite: when you're writing the first draft and things click and suddenly, it comes pouring out and its easy and you're not even thinking about it, you're just feeling it. You are the character and you are living the story without any idea of what will happen next. You start dreaming about it and it starts coming every time you sit down.

Least favorite: when I'm in the middle of something and I am interrupted by travel. It may take me a week to get back into my groove and that's a major drag. It's a constant battle.

Give yourself permission to write badly. First drafts are about getting everything out of your head where they're all clumped together and messy, and out onto the page where you can see what you have. It's like painting. You squeeze all the colors out onto the palette and then you can see what you have to work with and works and what doesn't. Almost every writer I know who is hugely successful will tell me their first drafts are horrible. That's what we all share with the great writers of our time: we can all be horrible too! But it's what they do after that that makes them great. Writing is about rewriting.  Join a critique group, get feedback and listen to what your readers tell you. You need fresh eyes.

I've been blessed with having met many of my contemporary favorites, so I'll have to go with the old heads or the dead. I wouldn't mind hanging out with those three writers in answer one. That would be a volatile mix and a dang good time.


Posted by middle grade ninja at 8:30 AM