Daniel José Older and I chat about his bestselling young adult series SHADOWSHAPER CYPHER and his new middle grade series, DACTYL HILL SQUAD. And STAR WARS, of course, including what it was like to get to read the SOLO script early. Daniel José Older shares information about his process, marketing tips, and how to present an authentic version of yourself to the world. And his adorable dogs make cameo appearances. This conversation was an absolute treat and it's not to be missed.

Daniel José Older is the New York Times bestselling author of the Middle Grade historical fantasy series Dactyl Hill Squad, the Bone Street Rumba urban fantasy series, Star Wars: Last Shot, and the award winning Young Adult series the Shadowshaper Cypher, which won the International Latino Book Award and was shortlisted for the Kirkus Prize in Young Readers' Literature, the Andre Norton Award, the Locus, the Mythopoeic Award, and named one of Esquire's 80 Books Every Person Should Read. You can find his thoughts on writing, read dispatches from his decade-long career as an NYC paramedic and hear his music at http://danieljoseolder.net/, on youtube and @djolder on twitter. 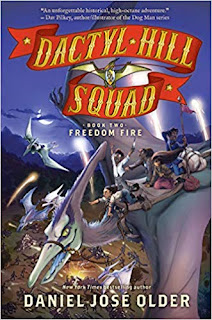 Magdalys and the squad are flying south on pteroback. South to rescue her older brother. South to war.

The squad links up with the dino-mounted troops of the Louisiana Native Guard, an all-black regiment in the Union Army fighting to free their people. They're led by General Sheridan, surrounded by enemy forces in Tennessee and desperate for any edge to sway the tide of battle. Magdalys's burgeoning powers might be the Union's last hope. But she doesn't want to abandon the search for her brother. And she might not be the only one with a mysterious connection to dinosaurs.

With the Civil War raging around her and the Union on the brink of collapse, how can Magdalys choose between the army that needs her help to survive and the brother she risked everything to save?