Shauna Holyoak and I discuss her KAZU JONES series with tips for writing middle grade mysteries, rewriting a story until it's right, and writing about a protagonist that's a different race than her author. Shauna tells the tale of how she landed her agent, previous guest Carrie Pestritto, and how she started her literary career after becoming a parent by writing a regular column. We also chat about book marketing, school visits, actively working to transition from a pantser to a plotter, and so much more. 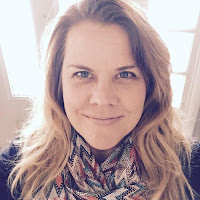 Shauna has been telling stories long before she could ride a bike, and some of them are even true! She writes for kids and teens and thinks it’s kinda the best job ever. Kazu Jones and the Denver Dognappers is her debut novel, and it was released by Disney-Hyperion in April, 2019! She lives in Idaho Falls, ID with her husband, six of their seven children, and two naughty dogs. 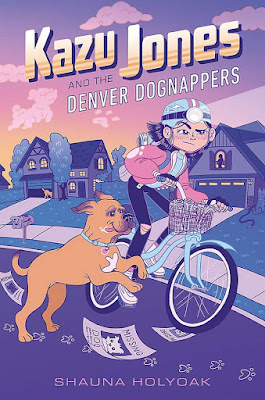 PUBLISHERS WEEKLY: “In this spirited debut, Holyoak introduces an indefatigable heroine whose distinct voice and loyal canine companion contribute to her considerable appeal. The diverse allies, plot twists, and delightful dogs make this a memorable beginning for Kazu and her friends.”

KIRKUS: “Holyoak creates a well-paced mystery with approachable characters and issues. The dognapping case and the go-get-’em attitude of Kazu provide just enough suspense and action without being too scary. Holyoak sprinkles in topics of growing up, including friendship, relationships with parents, mean people, and telling the truth.   A not-too-scary, diverse mystery for those who love action, dogs, and spunky heroines.”

Packed with high stakes mystery and tons of heart, this first installment in a new series introduces Kazu Jones-a spunky, scrappy detective who's this generation's Harriet the Spy.

When a string of dognappings grips her Denver neighborhood, Kazu Jones vows to track down the culprits. She can't stand to see more dogs go missing-especially once her neighbors' beloved pet is taken because of her gigantic mistake.

With the help of her gang-including her best friend and expert hacker, March; and her ginormous, socially anxious pup, Genki-Kazu uncovers evidence that suggests the dognapping ring is bigger than she ever imagined. But the more she digs, the more dangerous her investigation becomes. The dognappers are getting bolder, and Genki could be next...


ShaunaHolyoak.com
Posted by middle grade ninja at 8:28 AM