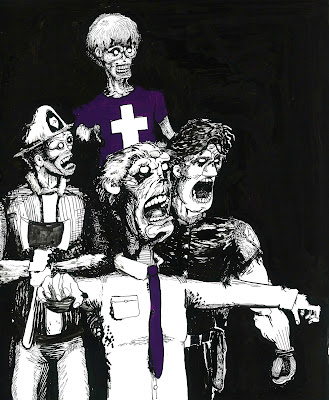 Last time on Ninja Stuff: I announced I've published my mean and nasty Young ADULT novel All Together Now: A Zombie Story, available here. I also revealed Richard Adams liked something I wrote enough to blurb it and it was all due to the magic of the internets, where I plan to stake out my publishing career.

This Weekend I'll be posting the first 14 chapters of All Together Now: A Zombie Story, so you can read them here for free. Later, I'll be writing up a Book of the Week post for my own book and a ridiculously long afterword exclusive to this blog for long-time Esteemed Readers who like it when I post about writing. I'm never going to have more to say about a book than when I discuss my own, except for maybe The Dark Knight Returns:)

But don't you worry, Esteemed Reader. This blog isn't going to become a 24/7 infomercial for a book that's not even middle grade. To prove it, we'll have a literary agent here Thursday and next week, we'll talk about someone else's book, which is the Ninja's true business. But I've built a nice little platform for promoting books and writers and I'd be silly not throw a little of that promotion my way. After that, we'll get back to our regularly scheduled blog.

This is actually good news for you, Esteemed Reader. Even if you never read my book, my having one available will give me more motivation to keep this blog running. But really, if you like my blog, why wouldn't you want to read my book? Also, as I'm learning the ropes of indie publishing, I can share my missteps and hard-learned lessons with you so you'll be better prepared for publication whether you go indie or traditional.

For 14 years, I've been seeking traditional publication. Prior to that, I was a film school student training to be a movie director. I made one full movie, but I wrote 8 scripts, the last of which weighed in at an un-filmable 300+ pages. I realized I liked sitting alone and writing the screenplays more than I liked collaborating with a bunch of people trying to make a movie somewhat reminiscent of the story I had in mind. If publishing makes you pull out your hair, Esteemed Reader, you shouldn't even consider film.

I left film school because I didn't want to compromise my perception of story. It's avarice, naturally, but I prefer to think of it as artistic vision:) Adam Smith, my best friend since the third grade, also happens to be an amazing artist, and we decided to partner up to create children's books. Having Adam as a partner brings a fresh perspective to a project, without inviting the too many chefs that spoil the broth. The zombies above are very much Adam's creation, but he lets me have enough input that the picture is close to what I would draw if I had his talent.

Together we created a series of books that were roundly rejected. I went back to college and got degrees in writing and literature, which naturally led me to a career as a financial adviser:) All the while, I was scheming to become a famous author so I could take my obsessive hobby full time. For this reason, I ignored a lot of clear and present opportunities in favor of working for the imaginary future of fame and fortune that was always awaiting at the end of the next book.

Along the way, I fell in love and got married. I bought cars, and worked harder at my just-for-now day job to get promoted and provide a nice life for my family and funniest thing, my just-for-now job has become my real job. The life I thought of as my only temporary pre-publication life has become my actual life.

A common dream in beginning writers is something like this: I finish my book, an agent loves it, she sells it to a major house, it sells a gajillion copies, they let me direct the movie, and my father/mother/brother/sister/aunt/uncle/cousin/teacher/rabbi was wrong! I am good enough!

Esteemed Reader, the truth is a version of this dream is possible. I've seen it first hand. Years ago at a writer's conference, I met a very young girl who told me she'd written a novel that sounded too much like Harry Potter to me, and she thought my UFO book sounded horrid (she was right, I was wrong). It quickly became apparent we were competing for the same literary agent and a rivalry formed between us. The agent picked her, negotiated a deal with a major house, the book has sold extremely well, and the movie is coming soon.

Good for her. Sincerely. I've read the book and it's excellent. This writer worked hard and her hard work is paying off. I don't claim to know this person as we were only together a few days and I can't imagine her remembering me, but I don't recall anything particularly special about her. That's not derogatory. She was enthusiastic, she was well read, she was a hard worker, she was obsessed with creating a great story, and she was thorough and professional. She was a writer deserving of the success she's had. It's just that she wasn't the only writer at the conference about whom I could make those same statements.

Somewhere in the world is the guy that stood in line behind the fella that bought the winning lottery ticket. No doubt, many will argue that this writer worked harder than I did and created a better story, but that's a subjective argument. I would've made this argument if I hadn't seen it with my own eyes.  I'm telling you this writer is amazing and deserves her success. I'm also telling you she got lucky. The stars aligned, she wrote the right kind of story at the right time, she met the right agent who got her the perfect distribution. The book resonated with readers because of this writer's craft and skill, but it got to readers in part by luck. The fact that being lucky in this business takes a lot of hard work doesn't change the fact that it's still being lucky.

Over the last 14 years, I've met a whole lot of writers, and only a handful have been that lucky. Most of the writers I meet are either hoping to be published, or have been published and are longing to be published again. The few I've met who've had some success may be people you've heard of, but they aren't making a living from their writing. They're working day jobs the same as the newbies and they're making less money than the indie authors I know. And they live in fear of their series being canceled or their publisher dropping them or of not having enough money because instead of working a sensible job, they chased after this writing thing.

The publishing industry has changed and is changing. And I've changed too. I don't especially want to be famous anymore (how would I people watch?) and if I can afford to provide for my family and keep writing, I consider myself already rich. If someone someday made a movie from one of my stories, that would be interesting, but I'm not writing movies, I'm writing books. My goals in life are significantly more modest now than when I started. I want to spend time with family and friends and I want the freedom to write the things I want to write the way I want to write them.

Up until this year, if a publisher offered me a contract (and some editors told they me they planned to, they just got shot down by committee), I would've jumped on it. But my perception of being a traditionally published author has changed. The scenario I described for this one author--you'd know her if I said her name, but I won't--is not the norm. Her book is good, but it's not that good (another subjective argument). She didn't write a sacred text. She won a cosmic lottery by writing the right kind of book at the right time. For her, traditional publishing is the best possible route.

Esteemed Reader, I'm no longer interested in investing my time and hard work in hopes of winning a lottery if it means giving up control of my work. Only seven out of ten books earns back its advance and the average advance is around $5,000, minus your agent's cut, and newbie writers probably won't get that much. But supposing I did, $5,000 is not enough to replace my job. It's not even enough for me to justify taking time off work and away from my family to do school and library visits.

Most traditionally published books end up spine-out on an ever decreasing amount of shelf space in an ever decreasing number of bookstores for six months or so, then they're remaindered. If a publisher decides to make an ebook version available, it will likely be priced higher than indie books on the same topic.

The author has little to no say in cover design and may have to comply with some of the ridiculous editorial demands I've heard tell of. I know a writer who abandoned her publishing contract because she was ordered to add "50-Shades-of-Gray-like sex scenes" to her Christian YA romance. There are plenty of great editors out there who make books better, but being partnered up with them is its own lottery.

Again, there are many smart, well-intentioned folks in the publishing industry. I respect them and I'd love to work with them. I just don't trust that those are the folks I'll end up working with right off the bat. I'd like to establish my brand independently, then partner up with traditional publishers later if they're interested.

For years, I've been learning the only writers more miserable than the would-be authors yearning to be published are the writers who've been published. For years, I've been wishing there might be another way. If only writing a book could be like blogging, I've wished, where I just reach out directly to Esteemed Reader and say, "Hey, I wrote this for you."

More, waiting patiently for some publisher somewhere to hand me a readership feels too much like singing "Someday my prince will come." I would never tolerate that sort of passivity in a protagonist, not when there's an alternative path to finding readers, challenging though it may be.

I've got enough left to say for one more post, so I'm going to put up that Back To The Future logo and meet you back here tomorrow. In the meantime: Hey, Esteemed Reader, I wrote this for you.

Posted by middle grade ninja at 7:42 AM

Email ThisBlogThis!Share to TwitterShare to FacebookShare to Pinterest
Labels: All Together Now: A Zombie Story, Going Indie, Indie Publishing, NINJA STUFF, The And Then Story, Zombies