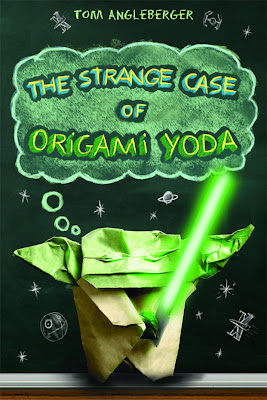 First Paragraph(s): The big question: Is Origami Yoda real?
Well, of course he's real. I mean, he's a real finger puppet made out of a real piece of paper.
But I mean: Is he real? Does he really know things? Can he see the future? Does he use the Force?

Tom Angleberger will be here Thursday to face the 7 Questions.

Glad to see you I am, Esteemed Reader. Enjoy this week's book you will. Growing tired of this Yoda talk already, you are. Annoying, it is. Helping, this isn't.

Okay, fine. I'll do the rest of the review in boring old forward-speak and the Force will just have to be with us anyway. Whichever direction our sentences, I'm very excited to have Tom Angleberger with us this week as he's kind of a big deal:)

He's what I call a "Wal-Mart famous author" meaning I can buy his book at Wal-Mart. Most small towns have a Wal-Mart super center in place of all other stores and that super center likely has only one to two shelves devoted to books. Therefore, only the most-popular, most-likely-to-sell books are placed there. Usually, it's the same authors that make it to those coveted shelves: King, Patterson, Grisham, along with a few movie novelizations, and here in Indiana, prayer devotionals or Joel Osteen give-me-all-your-money-for-Jesus propaganda. That guy terrifies me! His eyes are dead: 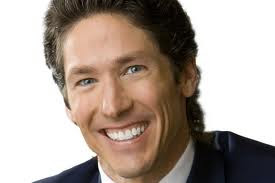 Anywhoo, I routinely check my local Wal-Mart for some of the best people-watching around and to see who made their bookshelves, and for a long while now I've been seeing the Origami Yoda books: Darth Paper Strikes Back, The Secret of the Fortune Wookie, and Art2-D2's Guide to Folding and Doodling. I'm hoping mentioning all of the books by title will allow Tom Angleberger to forgive me for that Joel Osteen business:)

For a while I've been marveling at what a clever concept for a book series origami Star Wars characters was. I finally broke down and read one, thinking it would probably be a book I read for fun and didn't review here at the blog. But it turns out all that Wal-Mart fame hasn't gone to Tom Angleberger's head and he'll be here Thursday assuming he doesn't read this review:)

What I found when I read The Strange Case of Origami Yoda warmed my heart: a good story well told. The book has a great concept and I have no doubt including instructions on how to make your own Origami Yoda has helped make the book a classroom favorite. But there's more to to this book than Origami and Star Wars and if you too want to write a book that makes you Wal-Mart famous, you'd do well to take note.

What I love about that first line above is that it's a question. There's no preamble to this story, Angleberger gets right to it. He establishes first the question: Is Origami Yoda real. Second, also on the first page, he gives the narrator and thus the reader a personal stake in the answer:

It's REALLY important for me to figure out if he's real. Because I've got to decide whether to take his advice or not, and if I make the wrong choice, I'm doomed! I don't want to get into all that yet, so for now let's just say it's about this really cool girl, Sara, and whether or not I should risk making a fool of myself for her.
Origami Yoda says do it, but if he's wrong.... total humiliation.
So I've got to know if he's real. I need solid answers. I need scientific evidence. That's why I went around and asked everybody who got help from Origami Yoda to tell their stories.

The story is then presented to us as a case history. Each chapter is told from the perspective of a different character who has either benefited or been harmed by the advice of an Origami Yoda on the finger of Dwight. Who's Dwight, you ask?

Dwight is the guy who carries Origami Yoda around on his finger.
The strangest thing about Origami Yoda is that he is so wise even though Dwight is a total loser.
I'm not saying that as an insult. It's just a fact. Dwight never seems to do anything right. Always in trouble. Always getting harassed by other kids. Always picking his nose. Always finding a way to "ruin it for everyone," as the teachers say.
If he would just listen to Origami Yoda's wisdom, like the rest of us, he would have it made.

The advantage of every chapter being told by a different character is if the reader doesn't care for the current character doing the telling, she has only to wait until the next chapter for a new narrator. The potential pitfall of this approach is that the reader never becomes too attached to any one character except perhaps Dwight and possibly Origami Yoda.

Angleberger expertly avoids this pitfall by presenting The Strange Case of Origami Yoda like a trial and leaving the reader as judge and jury. Tommy, our narrator from the first chapter, adds his comments throughout, building a case that Yoda is real. His friend Harvey, a Yoda skeptic also gets his say:

So, basically, Origami Yoda Saved my butt!
That's when I started listening to Origami Yoda, and eventually a lot of other people did, too.
Harvey's comment: Oh yes, I believe in Paperwad Yoda! Wooo!
I believe he's a real, actual, genuine piece of paper stuck on the end of Dwight's real actual genuine finger. And I believe Dwight is the real, actual, genuine biggest nut since Mr. Peanut.

So is Origami Yoda real? Esteemed Reader, you know I'm not going to tell you that! But I will say I rooted in favor of that conclusion just as I rooted for the puppet Drog to have come to life in the similarly themed You Will Call Me Drog. I just think the world's a more interesting place when puppets really can come to life and interact with us--which is how I'll blindly lead us all to the puppet apocalypse:)

The Strange Case of Origami Yoda is a fun book featuring a good story, well-told, and you can't beat that (or get Wal-Mart famous without it). It's filled with fun illustrations and a lot of laughs. It's the perfect distraction for a study hall or long car trip. And throughout the reader gets the sense that Angleberger really understands kids and their concerns, especially Dwight, and that he really, really loves Star Wars:)

If you've read any of my Batman posts, you'll know I'm in no position to judge, Esteemed Reader.

And that's going to do it. As always, I'll leave you with some of my favorite passages from The Strange Case of the Origami Yoda:

My hands were shaking and my stomach was excited like the time my dad accidentally drove into a fire hydrant.

It seriously looked like I had peed in my pants. Really bad. I tried to cover it with my shirt, but it was that really shrimpy shirt of mine with Scooby-Doo on it and it wasn't long enough to cover the pee part. Which wasn't really pee, of course.

Also, I have to point out that according to Kellen's story, Dwight walked out of a bathroom stall with Paperwad Yoda on his finger. That's just gross, folks!

"'The Twist, was a song on the Spider-Man Three soundtrack," he said.


STANDARD DISCLAIMER: All reviews here will be written to highlight a book’s positive qualities. It is my policy that if I don’t have something nice to say online, I won’t say anything at all (usually). I’ll leave you to discover the negative qualities of each week’s book on your own.
Posted by middle grade ninja at 10:54 AM