Book of the Week: YOU WILL CALL ME DROG by Sue Cowing 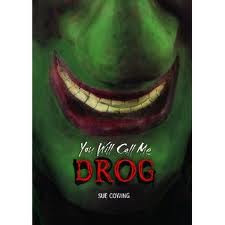 You Will Call Me Drog is a great book for readers of any age, but I think it will especially appeal to upper grade school and middle school readers, particularly those readers whose parents either have divorced or are in the process of divorcing. So hand a copy of You Will Call Me Drog to the morose adolescent in your life whose parents don’t love each other anymore:)

What a lot of middle grade books about divorce we’ve reviewed here, Esteemed Reader. Statistically speaking, children are still far more likely to experience their parents filing bankruptcy than filing divorce, if that cheers you up any:)


You Will Call Me Drog isn’t just about divorce, of course (with a horse at its source). But in a way, it reminded me of a dark version of E.T. the Extra Terrestrial. 6th grader Parker Lockwood is a boy who needs a friend to help him cope with his unresolved feelings from his parents divorce (feelings that will follow him around long after the scope of this book, I’m sure). What he gets is a hand puppet named Drog. What does Drog look like? Well, here’s a picture of author Sue Cowing modeling the latest in high fashion hand puppets: 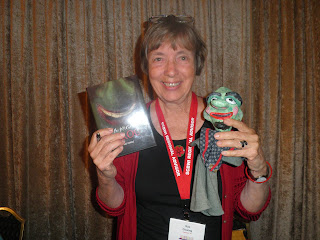 Drog is loud and opinionated and never stops talking. The problem is, so far as Parker knows, he isn't making Drog speak. Drog gives every appearance of being his own sentient being:

“Ha, ha. That’s funny, Boy. Nothing makes me talk. I say what I please when I please. Which is a lot more than I can say for you.”
There’s just one other little problem. Once Parker puts Drog on, he can’t take him off again. Every time Parker tries, Drog squeezes his hand painfully. Parker attempts any number of methods to remove Drog, including attempting to drown him, which struck me as a bit morbid until I remembered puppets don’t have lungs.
I stuck one blade of the scissors into the puppet sleeve and squeezed the handle. Nothing. I squeezed again, and again, until my hand cramped. Why couldn’t I cut? It was only cloth, but I might as well have been trying to cut rock. The scissors broke apart on the next squeeze, and I threw the two halves across the room.
Drog has an opinion on everything and most of his opinions are decidedly negative, especially his opinions about Parker, whom he calls only “Boy." Some of Drog’s opinions about Parker’s parents in particular are just a little too close to Parker’s own secret thoughts for comfort. Could it be Drog is an outward manifestation of Parker’s subconscious desire to speak his mind?

Is it possible Drog is really Tyler Durden (I never get tired of comparing children’s books to Fight Club), a split fragment of Parker’s mind that wants Parker to hit him as hard as he can (that totally happens a couple times before the book is over). That’s what Parker’s parents and friends and pretty much everyone thinks:
Late one night, Mrs. Belcher got one of her Great Ideas. She decided our class should make a puppet theater and put on a puppet play. Everyone could tell she was doing this to keep me from becoming the class weirdo, but I appreciated it.
So, it’s time to apply the principal of Ockham’s Razor and determine the most likely scenario: has a magical puppet taken control of Parker’s hand for the purposes of destroying his social life one piece at a time, or is it possible the whole thing is happening mostly in Parker’s mind. The brilliance of this story is that Cowing never tells us for sure which scenario is actually playing out. She provides plenty of evidence for both arguments, and though she strongly hints in favor of one, she never decides for the reader whether Drog is real.
And what difference would it make if she did? Whether Drog is alive in the world or only in Parker’s warped imagination, the result is the same. Drog is funny and you’re going to love him. He enjoys creating a bit of anarchy now and again, has a proclivity for belly dancers, and above all he says what he wants when he wants without regard to social taboo.

In one hilarious scene, Drog drags Parker to a strip club (don’t worry parents, they never get past the front door). In this scene, at least, I prefer to imagine Drog is real because it amuses me to wonder what interest a puppet without a lower half would have in naked ladies. And, of course, there’s no chance a 6th grade boy would ever have a subconscious desire to go to a strip club:)
Real or no, Drog says the things Parker can’t. Things that maybe need to be said. One of Drog’s most memorable comments is made to Parker’s estranged father:
“Let’s face it, Daddy-O.” Drog said. “Parker and his mom, they were your practice family, no? And now you've got a new wife and a new kid, and you've got it down. So Parker’s just kind of an embarrassing first try, am I right?”
It strikes me that so many of the books about divorce I've reviewed here have featured lousy fathers, most memorably Dear George Clooney, Please Marry My Mom. Oh sure, there’s the occasional lousy mother, such as in How to Survive Middle School, but for the most part it’s lousy fathers. I wonder if this disproportionate percentage has anything to do with disproportionate percentage of female middle grade authors to male:) In my writer’s group of 6, I’m one of 2 boys—just saying.

Note to self: when writing own middle grade book about divorce, make sure and let mom have it:)
In a way, Drog is a nearly perfect metaphor for a writer. I’m not sure if Sue Cowing intended this or not, but what is a writer’s story if not a hand puppet independently saying the things the writer isn't ready to say directly?

I would like to have been a fly on the wall when Andrew Lloyd Webber showed his much younger wife Sarah Brightman The Phantom of the Opera script in a which a creepy old (and totally gay, or why does he collect all those candelabras) guy lusts after and tries to manipulate a young soprano, only to have her leave him for a younger, straighter fellow. “Why, yes, I think our marriage is built to last, Sarah. Why do you ask?” Similarly, I would have killed to see the look on Joey Lauren Adams’ face when Kevin Smith asked his very “liberal minded” girlfriend at the time to star in Chasing Amy.
It isn't me, the writer will insist. It’s the characters that say these things, it’s the plot that motivates them. Mrs. Ninja knows to read any manuscript of mine featuring a black woman married to a goofy white guy very closely:)

Writing is a form of hypnosis, both for the reader and the writer. The writer convinces himself that he is writing a story unrelated to his own life at all, or maybe it’s a little related, but that’s just a coincidence. The story is a hand puppet that’s come to life and just happens to be saying the things I really want to say:)

I've always said I don’t know how I really feel about a topic until I write a story about it. There may be some people capable of examining their subconscious thoughts and desires without need of an intermediary object, but we writers mostly need our hand puppets.
And that’s going to conclude our Drog blog:) You will read You Will Call Me Drog and you will enjoy it. Make sure you come back Thursday to see Sue Cowing face the 7 Questions and join me the next two weeks as we have two more books to discuss before I again descend to my smoke and candelabra filled dungeon beneath the opera house to compose The Middle Grade of the Night. But for now, say you’ll share with me some favorite passages from You Will Call Me Drog (love them, that’s all I ask of you):
I didn’t want to hear any divorce-for-kids version…
I wanted to believe that, but it was easy math. If Mom had loved Dad a little more or me a little less, then one plus one plus one would still equal three. Together. Any way you looked at it, I was a factor.

Dad. Ringing the bell of a house that used to be his house, even though he knew I was the only one inside.

When I opened the car door it hit me, the smell of him in the car, the brown smell. That sounds awful, but I mean the smell of warm coffee and leather and cloves and cinnamon—from his shaving lotion, I guess—all mixed together. The memories in that smell surprised me, made me feel like a little kid again, and I wished I could cry for myself.

“Do you ever wash your pants, Boy? There are some nasty bits in your pocket I don’t appreciate having my nose shoved into.”

STANDARD DISCLAIMER: Book of the Week is simply the best book I happened to read in a given week. There are likely other books as good or better that I just didn’t happen to read that week. Also, all reviews here will be written to highlight a book’s positive qualities. It is my policy that if I don’t have something nice to say online, I won’t say anything at all (usually). I’ll leave you to discover the negative qualities of each week’s book on your own.
Posted by middle grade ninja at 7:15 AM

Email ThisBlogThis!Share to TwitterShare to FacebookShare to Pinterest
Labels: Book of the Week, Middle Grade, Review, Sue Cowing, Thoughts on Writing, You Will Call Me Drog