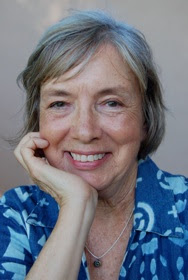 Sue Cowing was born in Illinois and now lives and writes in Hawaii. She earned degrees in history from Knox College and Emory University, then studied Chinese and Japanese history at the University of Hawaii. After teaching history and Asian studies at La Pietra School in Honolulu for sixteen years, she earned an M.F.A. in Writing (poetry) from Vermont College of Fine Arts and began writing full-time. Her poems have appeared in: Virginia Quarterly Review, Cream City Review, Wormwood Review, Bamboo Ridge, Chaminade Literary Review, Hawaii Review, Negative Capability, and in several anthologies, including The Denny Poems and Sister Stew.

Around 1990, Sue began writing for children and now writes most often for them. Some of her stories and poems and a nonfiction article have appeared in CRICKET and SPIDER magazines. The University of Hawaii Press published her Fire in the Sea: An Anthology of Poetry and Art in 1996. She has written two books for children: My Dog Has Flies: Poetry for Hawaii’s Kids (BeachHouse, 2005) and a debut novel, You Will Call Me Drog (CarolRhoda Books, 2011).

Sue has received Ka Palapala Po‘okela Awards for Excellence from the Hawaii Publishers’ Association for Fire in the Sea and My Dog has Flies as well as the 2006 Cades Award for Literature, the Grand prize for fiction from Negative Capability, and the Children’s Christmas Fiction prize from the Honolulu Advertiser. She is Co-Regional Advisor of the Society of Children’s Book Writers and Illustrators--Hawaii and has been involved with the Biennial Conference on Literature and Hawaii’s Children for fourteen years.

Among my favorites are The Book of Everything, by Guus Kuijer; The Book Thief, by Marcus Zusak; To Kill a Mockingbird, by Harper Lee; Botany of Desire, by Michael Pollan; Bud, Not Buddy, by Christopher Paul Curtis, and Lizzie Bright and the Buckminster Boy, by Gary D, Schmidt.

Seven days a week, I get up at 4:30 am to write, not because I’m disciplined but because it’s easiest then to get the uninterrupted quiet time I crave--when everyone else is asleep! Years ago, I also declared Wednesdays my hermit day.  Between 8am and 4pm on that day I don’t read email or answer the door or the phone or even speak when spoken to.   Those are the scheduled times, but I may be thinking all day any day about something I’m writing.  I read mostly in the evenings, but also sometimes when I’m supposed to be writing.

I've enjoyed writing poems and stories since I was little, but as an adult I did a lot of other things before deciding I really wanted to be. . . a poet. I worked seriously at poetry—reading and writing, reading and writing some more, getting published in some journals—and then fiction ideas began creeping in, and I realized how much I  liked  inventing stories, first for adults and then for children.  I won a competition with an adult story, then published a few stories and poems in Cricket and Spider magazines and a collection of children’s poems.  But meanwhile I was working on novels.  I doubt if many authors’ first published novels are actually their first novels.  You Will Call Me Drog certainly isn't mine — I've got drawers full of manuscripts.  What finally led to publication was a stroke of luck.  On my first query to an agent I found the perfect match. Sarah Davies was a Drog fan from the beginning, and she found me the ideal publisher/editor for this book.

Well-written books (about anything) are the best teachers. I have a few talents and inclinations that I’m sure have helped me in writing: an ear for  the rhythms and textures of language, a tendency to think in images and metaphors, a curiosity about motivation.  But  you use what you’ve got.  For someone else it might be the kind of perfect schematic logic that can put the pieces of a complex plot together like clockwork and leave us breathless.  I do think there are a few genius writers, but that doesn’t mean nobody else can write a great book.  Mostly it’s love and honesty and hard work, putting in the 10,000 hours it takes to master your craft.  Even a writing genius may end up a one-book genius if he or she doesn’t commit and practice.

My favorite thing in writing is getting a new idea and dreaming about it, imagining those first words and the seemingly endless possibilities of the story.  My least favorite thing is all the paper I have to use before I’m done.  I revise and revise and revise, but I can’t do this on the computer.  I have to see in on the printed page and mark that up, then log back in.  I cringe when I think of all the print-outs I've done.  I use recycled computer paper, but still--sorry, planet.

“Read like a wolf eats,” as Gary Paulsen says.  Practice constantly.  Write for keeps, but don’t be in a hurry to publish—take years.  Don’t spend a lot of time reading books on writing--that’s mostly a neither/nor activity.  But there are a few great ones.  I cherish and re-read the timeless classic On Becoming a Writer, by Dorothea Brande, as well as From Where You Dream by Robert Olen Butler, Stein on Writing by Sol Stein, The Art of Fiction by John Garner, and, for deepening an already drafted book, Novel Metamorphosis by Darcy Pattison.

That “crazy dreamer” John H. Ritter, “the baseball novelist,” because he is so real, present, and shining that even if you've just met him, you know him, trust him, and immediately begin talking with him about what matters.  And he’s so spontaneously funny!  Wait— I've already had lunch with him.

Posted by middle grade ninja at 6:52 AM

Email ThisBlogThis!Share to TwitterShare to FacebookShare to Pinterest
Labels: 7 Questions For Writers, Interview, Middle Grade, Sue Cowing, You Will Call Me Drog