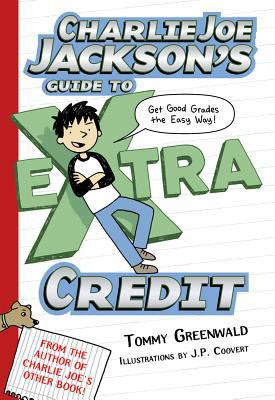 In response to this, I must ask just how hilarious did Mr. Greenwald find his own books to be:)

I kid, I kid. I found the first Charlie Joe Jacksonadventure to be hilarious and his second is even funnier. There's depth to both of Mr. Greenwald's books, but more important than lessons learned or "true meanings" and other such garbage English teachers long to read essays about, the Charlie Joe Jackson books are good time reads. If you pick up a Charlie Joe Jackson book, you know what you're going to get: a sarcastic tale of adolescent angst that will be fast and fun to read, and that's important.

There likely won't ever be a Charlie Joe Jackson's Guide to the Meaninglessness of Life or Charlie Joe Jackson's Guide to Dealing with Your Friend's Death After She Fell off the Special Bridge You Used to Create Fantasy Worlds Together. This ain't that kind of party pal, and Tommy Greenwald's readers know it ain't that kind of party.

If I had to guess, I'd say Charlie Joe Jackson's Guide to Summer Vacation will involve Charlie Joe in a predicament caused by his own avarice, be composed of short, breezy chapters, many of which will be only one page to make the reading faster for reluctant readers (Greenwald's bread and butter), and it will feature hilarious 1-page "tips" from Charlie Joe himself. The style will be uniform to the first two books because Tommy Greenwald has established a precedent and made an implicit promise to his reader of a brand. There will be return readers because they know what they're going to get and they now know they can trust Tommy Greenwald to deliver the goods. Assuming Mr. Greenwald is amused rather than offended by that crack I made regarding how much he enjoys his own books and sends me another free copy, I'll be a return reader as well:)


If you haven't read either of Charlie Joe Jackson's tales thus far (stop reading and head to an independent bookstore, or, amazon if you don't have time to make a stand for social change in your consuming), here's a taste of what your going to get:
Reading and schoolwork are the backbone of every child’s education.
It’s extremely important to study hard, and respect your teachers. The best way to make sure you get good grades is to do your work on time, and take great care and pride in everything you do. Try not to rely on extra credit if you don’t have to, because it can turn out to be a very difficult process.
So, that’s my first tip.
Or at least, it would be if we were living in fantasy land.
But we’re living in real life, so ignore everything I just said.
All of our favorite characters from Charlie Joe Jackson's Guide to Not Reading are back for round 2, including Eliza, the "it" girl who has a crush on Charlie, and Hannah, the girl Charlie fancies, and could it be that she's starting to fancy him? I'll never tell, but one of my favorite things about reading a sequel is so often it's a visit from old friends. There are some new characters as well and ole Hannah may just have some competition in the field of being crushed on by Charlie Joe Jackson. But of all of the lovely ladies in Charlie's life, my favorite of Greenwald's descriptions goes to Eliza:

Everyone cheered.
Eliza was used to people cheering in her presence, so she ignored it.


Just as in the first book, it amuses me that Charlie Joe has so little interest in books, yet he genuinely cares about his grades:
…but going home to a lousy report card was kind of like going to a scary movie with your friends even though you hate scary movies. There was no way out.
Charlie Joe is often a walking contradiction, it's true, but this time out Greenwald raises the stakes. Mr. and Mrs. Jackson are so dismayed by Charlie Joe's report card they threaten to make him spend his summer at Nerd Camp, and not the good Elissa Brent Weissman kind.

Charlie Joe would rather spend time with his friends and romantic entanglements. I'd love to read a Charlie Joe Jackson's Guide to Dating, but unless Charlie Joe starts aging a little faster each book, that's probably never going to happen.

Charlie strikes an agreement with his father: if he can get all 'A's and one 'B' on his next report card, he doesn't have to go to camp smarty pants. But as Charlie's buddy, Katie (who I think also has a thing for Charlie Joe, middle grade player) puts it:


"You're a really smart kid, but you hate to read and you hate to study. Your homework is always late and always lazy. And even in the easy classes you find a way to get on the teachers' nerves all the time. So what do you expect? I'm not sure why four days out of the year you suddenly get all guilty and upset about it. It's who you are."
And so begins Charlie Joe Jackson's quest for extra credit, which leads to a series of hilarious episodes in which Charlie Joe acts in the school play, joins the Student Goverment Council, and my personal favorite, poses as Byron Chillingsworth, famous boy foxhunter, for his art teacher:
Changing in the bathroom was an adventure. I could barely get the green shorts on, they were so tight. There was also a white shirt, a red vest, a checkered jacket that was way too small, and a hat that looked like Peter Pan’s.
I looked in the mirror. I laughed, until I remembered it was me. Then I kind of cried a little inside.
Like Charlie Joe Jackson's Guide to Not Reading, Charlie Joe Jackson's Guide to Extra Credit is a fun and very funny read for all ages. It comes highly recommended from me and I'm looking forward to Charlie Joe Jackson's future guides. And now I'll leave you with some of my favorite passages from Charlie Joe Jackson's Guide to Extra Credit:

Katie bought herself a bag of carrot sticks, which are like potato chips without the goodness.

My dad shook his head. “Charlie Joe, this is NO GOOD.” (The capital letters mean he said it loud enough to make the dogs go into another room.)

I could swear Mr. Twipple had tears in his eyes. “This is the late John Gielgud,” he said, “one of the greatest Shakespearean actors ever to grace the stage.”
We watched some more.
“And, when I listen to Sir John, I remember why I got into this business.”
It didn’t seem like a great idea to point out that one the worlds’ greatest actors ever and a middle school Drama teacher weren’t necessarily in the same business.

Posted by middle grade ninja at 7:34 AM