Middle Grade Ninja is available on Soundcloud, Stitcher, itunes, Podbean, Podblaster, RadioPublic, blubrry, Listen Notes, Google Play, and many other fine locations.
Hena Khan and I discuss her career thus far in children’s publishing and her wide range of books from IT’S RAMADAN, CURIOUS GEORGE to ZAYD SALEEM, CHASING THE DREAM to her most recent MORE TO THE STORY and the upcoming AMINA’S SONG. We discuss how she strives to create the representation in children’s literature that was lacking when she was a young reader and the importance of writing stories about Muslims rather than stories solely about being Muslim. All this and so much more await Esteemed Audience. 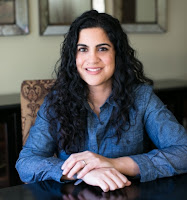 Hena Khan is a Pakistani-American who was born and raised in Maryland, where she still lives. She enjoys writing about her culture as well as all sorts of other subjects, from spies to space travel. She is the author of the middle grade novels Amina’s Voice, Amina’s Song, and More to the Story and picture books Golden Domes and Silver Lanterns, Under My Hijab, and It’s Ramadan, Curious George, among others. 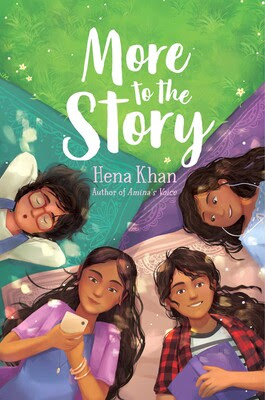 From the critically acclaimed author of Amina’s Voice comes a new story inspired by Louisa May Alcott’s beloved classic, Little Women, featuring four sisters from a modern American Muslim family living in Georgia.
When Jameela Mirza is picked to be feature editor of her middle school newspaper, she’s one step closer to being an award-winning journalist like her late grandfather. The problem is her editor-in-chief keeps shooting down her article ideas. Jameela’s assigned to write about the new boy in school, who has a cool British accent but doesn’t share much, and wonders how she’ll make his story gripping enough to enter into a national media contest.
Jameela, along with her three sisters, is devastated when their father needs to take a job overseas, away from their cozy Georgia home for six months. Missing him makes Jameela determined to write an epic article—one to make her dad extra proud. But when her younger sister gets seriously ill, Jameela’s world turns upside down. And as her hunger for fame looks like it might cost her a blossoming friendship, Jameela questions what matters most, and whether she’s cut out to be a journalist at all…
HenaKhan.com
Posted by middle grade ninja at 12:04 PM