I tell Kelly McWilliams about a book I started to write before I discovered how very similar it is to her superior novel, AGNES AT THE END OF THE WORLD. We bond over our mutual fear of cults, including the cult of racism, and our love for Stephen King. We discuss her novel, MIRROR GIRLS, and our experiences in mixed-race families. We also talk about working with her mother, the novelist Jewell Parker Rhodes, publishing a debut novel at the age of 15, tips for structuring stories from dual perspectives, crafting empathetic villains, the dangers of religious thinking, how stories can be emotional mirrors, and so much more. 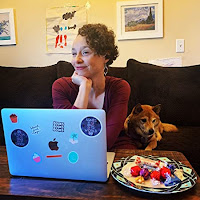 Kelly is a mixed-race writer. AGNES AT THE END OF THE WORLD (2022) was a finalist for the Golden Kite Award, and MIRROR GIRLS (2022) is a Junior Library Guild Gold Standard Selection. She’s written for TIME, Romper, and Bustle, among other outlets. Kelly lives in Seattle with her family. 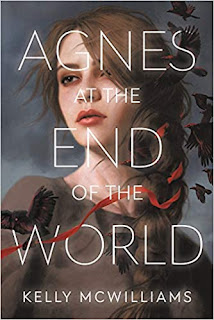 The Handmaid's Tale meets Wilder Girls in this genre-defying novel about a girl who escapes a terrifying cult only to discover that the world Outside has succumbed to a viral apocalypse.Agnes loves her home of Red Creek—its quiet, sunny mornings, its dusty roads, and its God. There, she cares tirelessly for her younger siblings and follows the town's strict laws. What she doesn't know is that Red Creek is a cult, controlled by a madman who calls himself a prophet.Then Agnes meets Danny, an Outsider boy, and begins to question what is and isn't a sin. Her younger brother, Ezekiel, will die without the insulin she barters for once a month, even though medicine is considered outlawed. Is she a sinner for saving him? Is her sister, Beth, a sinner for dreaming of the world beyond Red Creek?As the Prophet grows more dangerous, Agnes realizes she must escape with Ezekiel and leave everyone else, including Beth, behind. But it isn't safe Outside, either: A viral pandemic is burning through the population at a terrifying rate. As Agnes ventures forth, a mysterious connection grows between her and the Virus. But in a world where faith, miracles, and cruelty have long been indistinguishable, will Agnes be able to choose between saving her family and saving the world?

Email ThisBlogThis!Share to TwitterShare to FacebookShare to Pinterest
Labels: AGNES AT THE END OF THE WORLD, Kelly McWilliams, MIRROR GIRLS