Sailaja N. Josh, Amy Maranville, Payal Doshi, and I discuss Mango + Marigold Press and their newest release, REA AND THE BLOOD OF THE NECTAR. We talk about the cycle of their book from submission to acquisition, editing and revising, marketing and promotion, all the way to its launch and beyond. We discuss the importance of increasing diversity in publishing, the role of luck in an author’s career, a flying saucer story AND a ghost story, crucial advice for writers, and so much more. 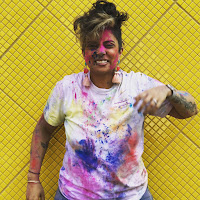 Sailaja N. Joshi is a design thinker, intersectional feminist, mother to two, a bibliophile, an entrepreneur, lover of bold, modern design, diversity activist, and an aspiring dog owner.
A Massachusetts native, Sailaja grew up a voracious reader. From Leo the Lop to Harry Potter, Lord of the Rings and Amelia Bedelia, she loved every book she read. If you were to ask her today what her favorite book is, she'd likely say either the Harry Potter series OR The Tao of Pooh. It really depends on the day.
She has always been interested in exploring multicultural generations and loves using those skills in new and exciting ways as the CEO and founder of Mango and Marigold Press. Mango and Marigold Press is an award-winning independent publishing house that shares the sweet and savory stories of the South Asian experience. Founded in 2014, the company has produced fourteen books across four different product categories and been featured on The Today Show, Us Weekly, People Magazine, the New York Times, the Washington Post and so much more.
In 2019, the company unveiled its #1001DiverseBooks initiative. With this program, Sailaja has committed to raising the funds to donate 1001 new, diverse books to literacy nonprofits bridging the accessibility gap within Children's Literature. Community members can sponsor books for just $10 and through this program ensure that every child has access to high-quality, diverse kid's lit. The company launched the initiative with its 14th book Finding Om and reached their goal of raising funds for 1001 books in just five short days. The company's mission has expanded to not only bridging the diversity gap in children's literature but also improve the accessibility of diverse children's lit in underserved communities.
Her ambition is to have Mango and Marigold Press be an active participant in the field of multicultural children’s literature, moving forward with the belief that we need diverse kids lit for all kids in a diverse world. When she's not working to change the face of children's publishing, she can be founded hanging with her two adorable children at the park or at circus class (really, that's a thing). 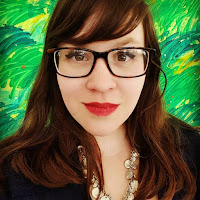 Amy Maranville is a Massachusetts-based editor with extensive experience in children's literature. In addition to her work as a senior editor for Mango + Marigold Press, Amy owns her own editing and writing company called Kraken Communications. Amy has worked with dozens of authors, many of them publishing for the first time, to bring forth their unique voices and experiences. She has also authored six picture books, two animated stories for a typing company, and has two easy reader non-fiction texts coming out next year. She lives in Somerville with her husband, two young sons, and a very sleepy basset hound named Barney. 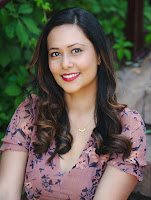 Payal Doshi has a Masters in Creative Writing (Fiction) from The New School, New York. Having lived in the UK and US, she noticed a lack of Indian protagonists in global children’s fiction and one day wrote the opening paragraph to what would become her first children’s novel. She was born and raised in Mumbai, India, and currently resides in Minneapolis, Minnesota with her husband and three-year-old daughter. When she isn’t writing or spending time with her family, you can find her nose deep in a book with a cup of coffee or daydreaming of fantasy realms to send her characters off into. She loves the smell of old, yellowed books. Rea and the Blood of the Nectar, the first book in TheChronicles of Astranthia series is her debut middle grade novel. For more information, visit her website, www.payaldoshiauthor.com, or follow her on Instagram @payaldoshiauthor and on Twitter @payaldwrites. 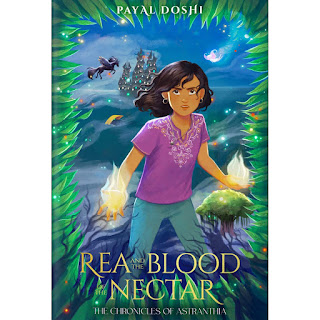 It all begins on the night Rea turns twelve. After a big fight with her twin brother Rohan on their birthday, Rea’s life in the small village of Darjeeling, India, gets turned on its head. It’s four in the morning and Rohan is nowhere to be found.

It hasn’t even been a day and Amma acts like Rohan’s gone forever. Her grandmother, too, is behaving strangely. Unwilling to give up on her brother, Rea and her friend Leela meet Mishti Daadi, a wrinkly old fortune-teller whose powers of divination set them off on a secret quest. In the shade of night, they portal to an otherworldly realm of Astranthia, a land full of magic and whimsy.

Struggling with the truth her Amma has kept hidden from her, Rea must solve clues that lead to Rohan, find a way to rescue him and save Astranthia from a potentially deadly fate. But the clock is ticking. Can she rescue Rohan, save Astranthia, and live to see it all?