Lamar Giles and I discuss his newest middle grade adventure novel, THE LAST LAST-DAY-OF-SUMMER, his young adult thrillers, and our mutual love for Stephen King. We also talk about the founding of We Need Diverse Books, his transition from self published author to traditionally published author (and the advantages of each publishing model), and also Stephen King. We actually talk about Stephen King a lot. If you'd like to support We Need Diverse Books, head to: https://diversebooks.org/our-programs/ And to apply for the grant  Lamar mentioned, head to: https://diversebooks.org/our-programs/walter-grant/ And to read my open (love) letter to Stephen King, head to: http://www.middlegradeninja.com/2016/10/ninja-stuff-open-letter-to-stephen-king.html 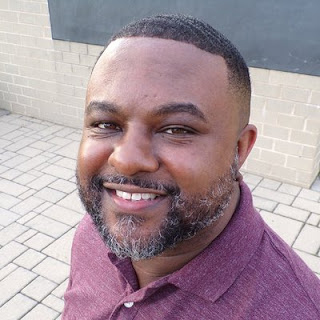 Lamar Giles is a well published author and a founding member of We Need Diverse Books. Lamar has two novels forthcoming in 2019: his debut middle grade fantasy THE LAST LAST-DAY-OF-SUMMER (Versify / HMH) and his fourth YA thriller SPIN (Scholastic).

Lamar Giles is a two-time Edgar Award finalist in the YA category, for his debut YA thriller FAKE ID (HarperCollins, 2014), and his second YA thriller, ENDANGERED (HarperCollins, 2015). His third YA thriller, OVERTURNED (Scholastic, 2017) received this glowing New York Times review, and was named a Kirkus Best Book of 2017. You can see the book trailer for OVERTURNED here. FAKE ID has been optioned by Sony Pictures (not yet announced). 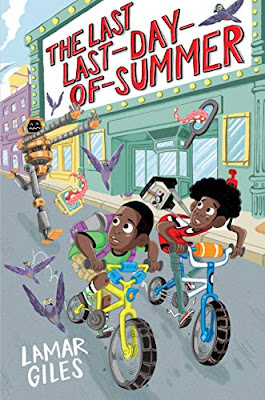 The Hardy Boys meets The Phantom Tollbooth, in the new century! When two adventurous cousins accidentally extend the last day of summer by freezing time, they find the secrets hidden between the unmoving seconds, minutes, and hours are not the endless fun they expected.

Otto and Sheed are the local sleuths in their zany Virginia town, masters of unraveling mischief using their unmatched powers of deduction. And as the summer winds down and the first day of school looms, the boys are craving just a little bit more time for fun, even as they bicker over what kind of fun they want to have. That is, until a mysterious man appears with a camera that literally freezes time. Now, with the help of some very strange people and even stranger creatures, Otto and Sheed will have to put aside their differences to save their town—and each other—before time stops for good.

"The Last Last-Day-of-Summer reminds me that all children deserve to exist in magical spaces where their imaginations and familial bonds will them into heroism. Every single child should have the freedom to be one of The Legendary Alstons. And I, for one, am grateful to Giles, and this brilliant story, for that reminder. " – Jason Reynolds, author of Newbery Honoree Long Way Down

“The legendary heroes of this legendary book are already legendary when the story begins! From there things can only get legendary-er!” – Tom Angleberger, author of the Origami Yoda series

"Lamar Giles has written an instant classic--readers won't want their time with the Legendary Alston Boys of Logan County to end." – Gwenda Bond, author of the Lois Lane series

“This is a series to look out for.” - Kirkus Reviews (starred review)

“Laced with humor, the fantastical time war plays out at a dizzying pace as Giles interjects affecting realism with themes of reconciliation, family, identity, and destiny.” - Publishers Weekly (starred review)