Tina Wells and I discuss the first book in her newest series, HONEST JUNE, as well as how she arranged for an exclusive distribution period through Target Stores. We talk about how she founded her first company at age 16 and built a successful career as a marketer before she became a writer. She shares specifics about how this has allowed her to research her demographic and incorporate reader feedback to ensure future books will resonate with tween readers. We also talk about series planning, being one of six children, the importance of authentic representation, and so much more. 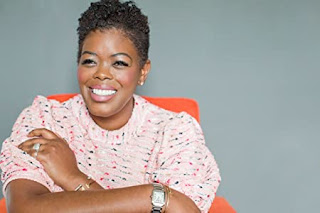 Tina Wells is a business strategist, advisor, author, and the founder of RLVNT Media, a multimedia content venture serving entrepreneurs, tweens and culturists with authentic representation. Tina has been recognized by Fast Company's 100 Most Creative People in Business, Essence’s 40 Under 40, and more. For over two decades she led Buzz Marketing Group, an agency she founded at age 16 with clients like Dell, The Oprah Winfrey Network, Kroger, Apple, P+G, Johnson & Johnson, and American Eagle that Tina connected with her network of 30,000 buzzSpotters® and 7,000 “momSpotters”, all influential millennials and passionate end-consumers. Tina is also the author of seven books, including the best-selling tween fiction series Mackenzie Blue, its new spinoff series, The Zee Files, and the marketing handbook, Chasing Youth Culture and Getting It Right. Tina’s board positions have included THINX, the United Nations Foundation’s Global Entrepreneurs Council, The Franklin Institute and Young Entrepreneur’s Council. She has also served as the Academic Director for Wharton’s Leadership in the Business World Program at the University of Pennsylvania and is a member of the 2017 Class of Henry Crown Fellows within the Aspen Global Leadership Network at the Aspen Institute. 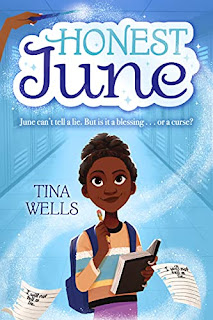 Middle school is hard—but it's way harder when a fairy godmother puts you under a truth-telling spell!June has always been a people-pleaser, telling harmless little lies to make her friends and family happy. She's convinced being honest about her feelings will only hurt the people she loves! Until, out of nowhere, a secret fairy godmother appears to "bless" her with the ability to only tell the truth! Seriously?! As if June didn’t have enough to worry about! Now, June has no choice but to be honest about how she feels. And the truth is: what June feels is stressed out. Middle school is no joke—between field hockey, friend drama, and her parents' high expectations, June feels so overwhelmed that sometimes it’s hard to breathe. When everything spirals out of control, will June find freedom in telling the whole truth and nothing but—or is she destined to battle the curse for the rest of her life?
TinaWells.com
Posted by middle grade ninja at 8:43 AM