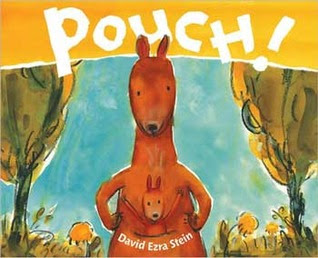 First Paragraph(s): When he was a brand-new kangaroo, Joey lived in the pouch. Until one day...

...he peeked out and saw the world, and his mama smiling down at him.

Really, that's all the review you need. We've read and reread many of Mr. Stein's books such as Interrupting Chicken, Tad and Dad, and Dinosaur Kisses. But Pouch! is the book I have memorized because it's the book Little Ninja most often carries across the room and smacks my knee with until I read it to him. In fact, on a couple occasions when he's had trouble sleeping and I didn't want to turn on the light, I've been able to recite the story of Joey the kangaroo without needing the book.

The trouble with writing a review of a picture book, which I've only attempted once before, is that my average review is three to four times the length of the book (but nowhere near as carefully considered). Likewise, I can't finish by listing some of my favorite passages as is my usual custom without reproducing 50-75% of the book, which I'm pretty sure Penguin's lawyers would find uncool:) Let's see how they feel about me posting a full two-page spread, which far more captures the spirit of this book than my quoting the text directly:

So what is it about Pouch! that makes it stand out to my son above so many great books, including his second favorite, Tickle Time by Sandra Boynton? This is a question I've spent a lot of time mulling over. I've often joked that having a son of my own is both a little bundle of joy and market research. People often laugh at that, but not Mrs. Ninja. She knows I'm mostly serious:)

My first thought was that it must be David Ezra Stein's unique artwork, which looks casual and fun, almost like pictures a child might draw. There are pockets of white around dark lines and the watercolors bleed intentionally over lines, as though they were finished coloring book pages. The pictures are soft and soothing.

I'm very jealous of Mr. Stein's artistic ability and I'm convinced his illustrating his own books sets him neck and shoulders above other picture book authors. His illustrations not only match the story, but tell the story so that if the child audience doesn't understand all the words, they can still follow the plot. After all, Mr. Stein doesn't need to spend a lot of words telling us Joey is scared or instructing parents how to read the word "pouch" when he can draw this: 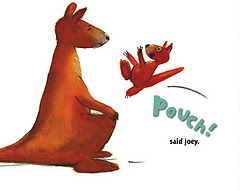 To my delight, it's not just the artwork my son loves. It's the story. And why not? A story about a baby kangaroo who wants to explore the world around him, but is often scared and wants to rush back to his parent could not be more relatable to my rugrat who spends his days doing the same. And as a parent who is constantly being assaulted by a little boy rushing back to me when he gets nervous, I relate to Joey's mother.

Mr. Stein builds suspense by establishing a pattern of Joey exploring something new, page turn, and... Joeys is frightened back to his mother's pouch. It's a simple concept, and it totally works. My son laughs when Joey meets the bee or the bird or the rest of them because he knows Joey is going to be afraid on the next page, and he relates to Joey. That laughter assures me that even though Little Ninja only speaks about twenty words, the time we spend reading books is not wasted. He understands and follows the plot and is as captivated by David Ezra Stein as I am by Michael Crichton.

Fatherhood has brought with it many wonderful moments and opportunities to be proud. The first time my son was captivated by an author's story was courtesy of Pouch! and so it will always have a place of honor on my shelf even when Little Ninja moves on to more complicated reads. If you have a young child or if you enjoy picture books, you need Pouch! in your life.

No favorite passages today, but here's a link to David Ezra Stein's website in which he writes about the making of Pouch!

STANDARD DISCLAIMER: All reviews here will be written to highlight a book’s positive qualities. It is my policy that if I don’t have something nice to say online, I won’t say anything at all (usually). I’ll leave you to discover the negative qualities of each week’s book on your own.
Posted by middle grade ninja at 12:09 PM