Book of the Week: MITCHELL'S LICENSE by Hallie Durand 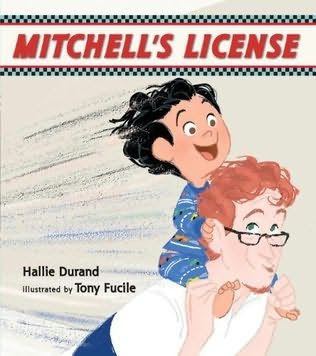 The book is the wonderful Mitchell’s License by Hallie Durand. I’d tell you Ms. Durand will be here on Thursday to face the 7 Questions, but she’s already been here! Hallie Durand is the pen name for literary agent Holly McGhee of Pippen Properties, who we interviewed back in January. This means you can read Hallie Durand/Holly McGhee facing the 7 Questions right now (or directly after this review). Technically, this counts as both our weekly writer interview and our weekly literary agent interview. But don’t you worry, Esteemed Reader. Though the blog will be quiet on Tuesday, I’ll have a fresh interview with a big time literary agent for you on Saturday as always, so make sure you find yourself here then.

The story of Mitchell’s License is thus: (spoiler ahead) our hero Mitchell is obsessed with cars, but hates going to bed. His father gives him a license that allows him to drive to bed and Mitchell’s car is his father. Mitchell drives his father around the house, stops for fuel at the cookie jar, but his father (most practical for an automobile) will not allow Mitchell any cookies before bed. Finally, his car takes control and drives Mitchell to the bedroom. His father promises Mitchell they can drive to bed again the next night. Mitchell goes to sleep and dreams about driving a real car to a real cookie gas station.

I love this book! Of course I do. Mitchell’s father is very white and his mother is darker skinned and Mitchell himself appears to be biracial, and they are presented as a happy, loving family. Mitchell’s License had me at hello and I’m going to keep it on my sacred shelf of Book of the Week books until Mrs. Ninja and I have little biracial ninjas I can read it to. More, the focus of this book is of a father’s love for his son and vice versa. That’s the sort of story I’m always happy to read and a perfect bed time tale for munchkins.

And that’s my review. As for craft points, I don’t really have any. I’ve never been brave enough to attempt to write a picture book because economy of language, as you’ve no doubt noticed by now, is not really my thing. But I do have some observations I’ll share with you.

The first is that page one tells us the story of the book entire in three sentences: Mitchell never ever EVER wanted to go to bed. Until his dad finally said he could drive there. Mitchell was three years, nine months, and five days old when he got his license.

Notice the first two sentences could easily have been combined to form one, but instead, Durrand has wisely broken them into two easier to digest bites of information for very young readers. This is a handy tip we middle grade writers might employ in our writing. But also notice that Durrand has told parents right off the bat of the story they are about to read. She has established Mitchell as a character and told of the book’s entire conflict before we turn to the next page. Right away, parents and children can decide if this is a book they want to read together or not, and they’ve been promised a worthy conflict should they choose to read on (I can’t imagine anyone not wanting to read on).

Was there ever a parent anywhere who did not have trouble getting their child to bed at bedtime? The great thing about Durrand’s conflict is that it will interest both parents and children. Children will want to read about a child their age that gets a driver’s license and parents will want to read about the techniques Mitchell’s father employs to get him to bed. There’s something for everyone and I’m certain that after reading this book more than one parent-child coupling will be trying out “driving” to bed.

My next observation, which I’ve already sort of made, is how sparse Durrand’s prose is. She reminds me of Hemmingway, but without all the booze and war and bull fighting and misogyny. Hemmingway famously wrote the lines: “He went to the mountain. It was there.” No frills, no fancy description, just right to it. And that is how Durrand has written Mitchell’s License: He also learned how to beep the horn. He liked the way it sounded… a lot!

My final observation is to note just how trusting of her illustrator Durrand is. This is a book that is in some ways completely dependent upon its pictures. I don’t know if Durrand had conversations with illustrator Tony Fucile as she wrote or if she wrote out long descriptions for him ahead of time. Fucile is also an author and illustrator and has animated for Disney, so he’s up to the challenge. Still, one of the reasons I’ve never considered writing a picture book is because I’m no artist and I’m not sure I can be as brave as Durrand in leaving so much of her story dependent on the work of a collaborator.

On a two page spread, Durrand has simply written the word “Ruh-roh.” The rest of the spread is an illustration of Mitchell on his father’s back “driving” him into a wall. If this picture isn’t funny (it is) or charming (it is), this part of the story does not work. In another scene Durrand writes only: The next night, even before his bedtime, Mitchell went to get his car. “You need some oil,” he said. And he poured in some oil. The car was sputtering a little, but Mitchell didn’t mind. “You’re OK,” he said as he closed the hood.

The only way this sequence works is if the illustrations show us Mitchell pouring juice into his unsuspecting father’s mouth and his father coughing (or sputtering) before Mitchell closes his mouth. Tony Fucile’s illustrations are wonderful and tell the story perfectly. The whole book works this way. In Mitchell’s mind, his father is a car, and so Durrand writes about the father character only as a car until the end of the book. She depends on the illustrator to show us what is really happening. He does and theirs is a fantastic collaboration, but you have to admire Durrand’s leap of faith.

And that’s it for another week, Esteemed Reader. Be sure to come back Saturday when we’ll have a big time literary agent here to face the 7 Questions. And come back next week when we’ll be discussing Susan Runholt’s newest Lucas + Kari mystery. I’d leave you with some of my favorite passages from Mitchell’s License, but if I did I would have almost reproduced the entire book here and I’m pretty sure that could get me in trouble. Instead, I’ll simply reiterate that Mitchell’s License is a wonderful book and highly recommended for the little driver in your life.

Posted by middle grade ninja at 11:36 AM