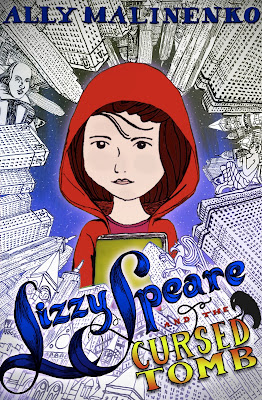 First Paragraph: Her feet didn't seem to touch the steps. She pounded, step after step, Sammy right behind her. Each footfall fell in line with her thumping heart. Downstairs, in the kitchen she could still hear her father fighting with the man who rang their bell. Her father had told her and Sammy to get upstairs. He sounded so serious, so strange.

Ally Malinenko will be here Thursday to face the 7 Questions.

Good morrow, Esteemed Reader! As per usual, today's review will be a tale told by an idiot, full of sound and fury, signifying nothing. And yet you come back every week:)

Ahh, Shakespeare. Nothing in literature makes me clench up faster than the bard. Quoting Shakespeare anywhere in a modern story can have this effect on some readers. And the Ninja has a quality liberal arts education and has acted in (not well) and directed Shakespeare's plays. Even so, somehow a writer invoking Shakespeare gives me the distinct feeling of being under-dressed.  I've shown up to dinner in shorts and polo because I thought we were having a causal story, but the author's wearing a tuxedo because this is to be leeeeeeeterature.

If I offer no other praise in this review, let me first say this: Ally Malinenko invokes Shakespeare in a manner that is fun and accessible. When the Shakespeare comes out in Lizzy Speare and the Cursed Tomb, and it does (often), it never once made me clench up or feel like the book snobs (the sort who feel no one's written a good action story since Homer died) had descended to pretentiously lecture rather than entertain.

Of course, Lizzy Speare and the Cursed Tomb isn't really about Shakespeare. It's about Lizzy Speare, a 12-year old girl with a love of reading and writing (I'm thinking Ally Malinenko an untold number of years ago) who happens to be an expert on all things Shakespeare:

“Well, a reader is one thing but honestly, I have never seen a child so in tune with language. You know, Mr. Levinson said she was the only person in class that doesn’t need the Cliff Notes for the Shakespeare he assigns.”
“You don’t say.” Rupert cleared his throat awkwardly. “I’ve never believed that Shakespeare should be taught as literature—it needs to be performed. But that’s just my opinion. C’mon, let’s go guys,” Rupert said, pushing his daughter towards the open car door.
“It’s uncanny. He said he’s never seen a student at this age so advanced.”
“Well, Shakespeare is my favorite,” Lizzy butted in.
“We all know that, dear, now come on, get in the car. We have to get going,” Rupert said.
“Well it was a pleasure to meet you, Mr. Speare. And I do hope that you will let Elizabeth join my theater group this summer.”
“Theater group?” Rupert said, stopping. “Yeah, well, I think we might have plans. Family obligations and whatnot.”

So what's up with Rupert there? And why is it so crucial that Lizzy Speare be so awesome at Shakespeare? Actually, Lizzy is pretty much awesome at everything, which is part of the fun of a fantasy tale (James Bond, anyone?). But it's particularly good she's awesome at Shakespeare because it turns out, minor spoiler, she and the bard are related. Zounds!

When Lizzy's father is kidnapped, Lizzy and her sidekick Sammy set off an adventure steeped in Shakespeare and mythology. As the story gets cooking, the real world slowly rescinds, making way for fantasy:

When Gossamer Willowfly headed back into the kitchen, Lizzy swore she saw thin green shimmering wings, like those of a cicada, fluttering on Gossamer’s back. Gossamer turned her head and winked at Lizzy and then was gone. When she came back in, Lizzy nudged Sammy but he just mouthed “What?” with a mouthful of eggs. This time Lizzy couldn’t see any wings.

And yet, amidst all the excitement and allusions, Malinenko is never too busy to slow down for a bit of advice to us writers:

“It’s good you shop at a place like this. Never skimp on a journal. When it comes to your writing, your precious thoughts, your deepest dreams, Elizabeth, you can never compromise. Especially not with the tools of your craft. They may in fact, change everything.”

Lizzy Sphere and the Cursed Tomb is a fun adventure for book nerds everywhere and throughout Ally Malinenko is unapologetic-ally geeking out with her love of literature. Even the chapter titles are quotations from Shakespeare such as "Something Wicked this Way Comes," "Something is Rotten in the State of Denmark," and my personal favorite chapter title, "This Way Madness Lies." Thematic Spoiler: the last chapter is "To Thine Own Self Be True:)"

Fans of Lizzy Sphere will no doubt clamor for a sequel and Ally Malinenko is no doubt laboring to produce it for them. This first tale is a good start and the perfect read for the lover of literature. As always, I'll leave you with some of my favorite passages from Lizzy Speare and the Cursed Tomb:

One of the witches limped forward and you could see the spider web of scars running across her face. Where her eyes should have been were two empty sockets, blackened and charred. In one hand she held the soft flax of yarn that was being fed into the spinning wheel and in the other she clutched an eyeball, her black nails digging into the meaty tissue.

Since her death her father rarely mentioned her mother. Jillian’s death was still painful for him, even eight years later. Lizzy remembered very little about her, just snatches, like photographs flipped by too quickly.

The sound of her father’s frantic voice would be the last thing Lizzy would remember before she was abducted.

Posted by middle grade ninja at 9:56 AM