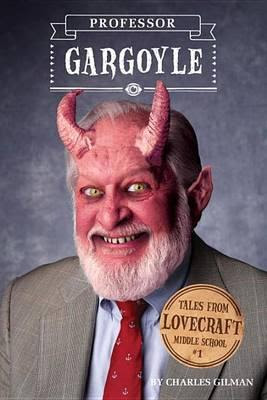 First Paragraph(s): Robert Arthur was surrounded by strangers.
He stood outside the entrance to Lovecraft Middle School, watching the students pass by, searching for a familiar face. Everybody was talking to someone. Kids were joking and laughing and goofing around. But Robert didn’t recognize a single person.
Earlier that summer, his neighborhood had been redistricted. This was a fancy way of saying that all of his old friends were attending Franklin Middle School, in the north part of town, but somehow Robert got stuck attending Lovecraft Middle School, in the south part of town.

Charles Gilman will be here Thursday to face the 7 Questions.

Do you like the scary books, Esteemed Reader? You know I do, which is why a scary book is two to three times as likely to be our Book of the Week. When I'm shopping for book, I'm two to three times as likely to buy a scary one and as a kid I was five to six times more likely. As you know, my favorite middle grade book of all time is Roald Dahl's The Witches.

If younger me had discovered the extraordinary Professor Gargoyle, I have no doubt I would've torn through the entire series of Tales From Lovecraft Middle School. It has touches of Roald Dahl's sensibilities, some wonderfully scary moments, relatable characters, and grossness combined with humor. As an adult, I'm curious to read the next tale, but Gilman has crafted an excellent book designed to suck in young readers in to the full series--and it's not just that the covers of the books are really, really cool.

Professor Gargoyle is an excellent stand-alone tale, but it's an even better start to a series, laying the groundwork for all that is to follow. Series writers take note: though the ending of this book sets up Book Two perfectly and leaves the reader wanting to buy Book Two right then and there, Gilman also definitively concludes book one. By the end of Professor Gargoyle, Robert Arthur's first plot has been resolved, though the door is opened for the plots that are to follow.

So what is Robert's plot? Well as you read in the first paragraph, he's starting at a brand new school due to redistricting. Having just been built, it's literally a brand new school. And on this first day this happens:

Finally Principal Slater stood up with oversized scissors and sliced the long green ribbon in half. At precisely that moment, the clouds turned gray and a low drum of thunder rolled across the sky.
It was weird, Robert thought. Just one minute ago, it had been a perfectly pleasant and sunny day.

That can't be a good sign. Really, if you're headed anyplace with the name Lovecraft, you're probably screwed:) Even worse, Robert's not the only one starting at Lovecraft Middle School:

Robert glanced over his shoulder, peering up at the bleachers, scanning the faces. There must have been four hundred kids in the arena. He knew that, sooner or later, he’d have to recognize someone.
And then he did.
The worst possible someone.
Oh, no.
Robert immediately faced forward.
But it was too late. He’d been spotted.
“Hey, Robert! Is that you? Robert Arthur?”
He couldn’t believe his rotten luck. Glenn Torkells? The one person he knew at Lovecraft Middle School—and it was Glenn Torkells? The bully who had tormented him for years?
“Robert! I’m talking to you!”
Definitely Glenn Torkells.

If you'll allow me a small spoiler: Glenn Torkells might not be all bad. It might just be he's the sort of character who, through events in the story, becomes a friend and sidekick to Robert for the series. If that were so, and you'll of course have to read the full book to verify, Esteemed Reader, wouldn't it be an interesting way to introduce the sidekick character?

The problem with having your bully character turn friendly (if that happened) is you would need an immediate source of antagonism to take his place. And this is crucial: Gilman knows not to make the bully friendly until that secondary, soon to become primary, source of antagonism comes along in the form of Professor Garfield Goyle (get it?), a Snape-ish instructor with a hatred for rats, which is odd, considering his diet:

Goyle raised the hamster high above his head. The animal swung its paws wildly, desperate to scramble away, but Goyle’s grip was too strong. He opened his mouth, as though threatening to eat the animal.
It was just a dumb, cruel stunt, Robert thought. The same kind of mean prank that Glenn Torkells seemed to enjoy. Goyle was just another bully.
Then there was a hideous snapping sound, and the bottom half of Goyle’s jaw collapsed. It fell open like the mouth of a ventriloquist’s dummy, revealing sharp white fangs and a gaping black maw. Goyle lowered the hamster between his lips and swallowed it whole.

I just love how unapologetically gross Gilman allows himself to be. He has a great deal of fun with rodents, particularly of the two-headed variety, and this will not be a fun read for the squeamish -or certain young girls and sisters, which will no doubt make the book all the more palatable for young boys:)

Professor Goyle makes a fine foil for this story (yep, I did), but Gilman is planning for a whole series. I'm not going to give away all his secrets, but Lovecraft Middle School gives new meaning to the idea of recycled materials. What the boys soon learn is that they're in for a lot more trouble than just one hamster-munching professor:

“Once I saw this movie about a haunted house,” he explained. “It looked totally normal on the outside, but inside all this weird stuff kept happening. Stuffed animals floating around. The daughter got sucked into a television set. Finally they figured out the house was built on an old Native American burial ground. The spirits of all the dead bodies were trapped under the house, so they were rising up to haunt them.”
“You think Lovecraft Middle School was built on an old graveyard?”
“It’s possible, isn’t it?”
Robert shrugged. “When you’ve got giant squids coming out of lockers, anything’s possible.”

Dude, I know that movie:) I'd like to thank Charles Gilman for not referring to it as an "old movie," though many younger readers will likely not have seen it. That's the nice thing about writing for children. Younger readers aren't as likely to have been desensitized by countless horror stories, and so the scares that won't faze hardened horror fans may keep them up at night.

But even those kids whose parents let them stay up for The Walking Dead will enjoy Professor Gargoyle. Gilman's packed in plenty of scares into a good story, well told, and very well-paced. The book moves right along serving up amusing characters and thrusting them in harm's way, without ever dragging.

And that's where we'll leave it, except that, as we'll learn Thursday, Charles Gilman is the pen name of Jason Rekulak, editor. Knowing that, I got a chuckle out of this passage:

An elderly woman with cat-eye glasses was demonstrating for the students how to use the e-readers. “These can be filled with downloaded books and checked out from the library—as long as you’re very careful with them, of course. Personally, I’m a little old-fashioned. I still prefer the feel of a real book with real pages. The best feeling in the world, if you ask me. But we have to embrace the future, don’t we, children?”

Indeed. I read my copy on a Kindle:) As always, I'll leave you with some of my favorite passages from Professor Gargoyle:

Robert walked to his locker—A119—and entered the passcode he’d received in the mail. Each button made a satisfying chirp when he pressed it, and then the locker door opened with a gentle pneumatic whooooosh.

When he finally looked up again, the shelves seemed to have grown taller. It must have been a trick of the light—the tops of the shelves appeared to be leaning over him ever so slightly, like trees blocking out the sun.

“What is that?” Glenn yelled.
“I warned you!” Karina said.
“You told us scary spiders. You never said giant spiders!”
“What’s the difference?!?”

He unfurled his glistening wings and they quivered with anticipation, spattering gooey mucus all over the classroom.

Posted by middle grade ninja at 11:57 AM