MarcyKate Connolly and I discuss her many bestselling “weird, creepy middle grade” novels, particularly her debut, MONSTROUS, and her transition to young adult with her newest release, TWIN DAGGERS. Despite my best efforts to turn the conversation to ghosts and flying saucers, we actually discuss quite refined topics such as Shakespeare and opera and an opera based on Shakespeare. We also chat about creating magical systems and rules in fantasy worlds, life during quarantine, turning 40, why Scrivener and Beat Sheets are a writer’s best tools, how rejection toughens a writer’s skin, and then we totally talk about flying saucers and ghosts.

MarcyKate Connolly is a New York Times Bestselling children's book author and nonprofit marketing professional living in New England with her family and a grumble of pugs. She can be lured out from her writing cave with the promise of caffeine and new books. Twin Daggers is her debut young adult novel, and she's also the author of several middle grade fantasy novels including Monstrous and Ravenous, and the Shadow Weaver series. You can visit her online at www.marcykate.com. 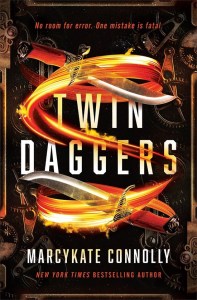 Aissa’s life is a web of carefully constructed lies. She and her twin sister, Zandria, are Magi spies, a magical people most believe to be extinct. And they’re on a mission for revenge.
This action and adventure spy thriller - a fantasy spin on “Romeo and Juliet” from New York Times best-selling author MarcyKate Connolly - is perfect for fans of Marissa Meyer and Elly Blake and is about to become your new obsession!
By day, Aissa and Zandra play the role of normal young Technocrats eager to fulfill the duties of their new apprenticeships. By night, they plot their revenge to retake their city from the Technocrats. But then Aissa is given a new mission: find and kidnap the heir to the Technocrat throne, who is rumored to be one of the Heartless - a person born without a working heart who survives via a mechanical replacement - and has been hidden since birth.
Aissa is more likely to be caught than to be successful, but she's never been one to turn down an assignment, even if the hunt is complicated by a kind Technocrat researcher who is determined to find a cure for the Heartless. But when Zandria is captured by the Technocrats, Aissa will do anything to get her sister back. Even if it means abandoning all other loyalties and missions...and risking everything by trusting her sworn enemies.