G. Neri and I discuss CONCRETE COWBOY, the upcoming Netflix film based on his novel GHETTO COWBOY. He explains how he creates character voices, how stories chose him, and how he translates scientists’ studies into fiction. We also talk about writing during a pandemic, looking for alligators, surviving Antarctica, renting videos from a pre-Reservoir Dogs Quentin Tarantino, working with Chick Corea, meeting Ray Bradbury, the advantage of flying under the radar, and so much more.
Click here to read G. Neri's original 7 Question interview. 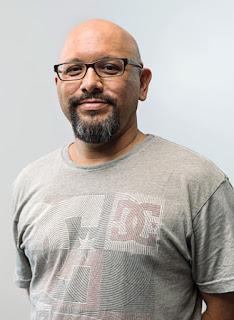 G. Neri is the Coretta Scott King honor-winning author of Yummy: the Last Days of a Southside Shorty and the recipient of the Lee Bennett Hopkins Promising Poet Award for his free-verse novella, Chess Rumble. His books have been translated into multiple languages in over 25 countries. They include Tru & Nelle, Grand Theft Horse, Hello, I'm Johnny Cash, and Ghetto Cowboy, which was made into the upcoming movie, Concrete Cowboy, starring Idris Elba. In 2017, he was awarded the first of two National Science Foundation grants that sent him to Antarctica. Prior to becoming a writer, Neri was a filmmaker, an animator/illustrator, a digital media producer, and one of the creators of The Truth anti-smoking campaign. He is currently co-chair of the Antarctic Artists and Writers Collective and writes full-time while living on the Gulf Coast of Florida with his wife and daughter.
GregNeri.com
Posted by middle grade ninja at 9:32 AM