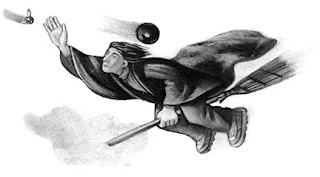 First Paragraph: Clutching their purchases, Mr. Weasley in the lead, they all hurried into the wood, following the lantern-lit trail. They could hear the sounds of thousands of people moving around them, shouts and laughter, snatches of singing. The atmosphere of feverish excitement was highly infectious; Harry couldn’t stop grinning. They walked through the wood for twenty minutes, talking and joking loudly, until at last they emerged on the other side and found themselves in the shadow of a gigantic stadium. Though Harry could see only a fraction of the immense gold walls surrounding the field, he could tell that ten cathedrals would fit comfortably inside it.

Finally, Esteemed Reader, after weeks of build up, we've reached The Quidditch World Cup! We talked last week about all of the plot elements Rowling was able to entwine within this one seemingly extraneous event. After all, Harry's not playing in The World Cup, and nothing about the event itself directly impacts the plot. That the idea of a Quidditch World Cup is fun (and will later make for a decent video game concept) is not justification enough for its inclusion in a book of 190,632 words.

You just know editors were all over Rowling to shorten this book and that she got it published at it's final length is a testament to Rowling's status at the time. That readers all over the world eagerly read every last one of those 190,632 words and yearned for more is a testament to her abilities as a storyteller.

Don't bother trying to justify an over-long manuscript of your own by comparing yourself to J.K. Rowling, Esteemed Reader. By the time Rowling was on the fourth volume in the Harry Potter series, she could pretty well push editors around the way corporate campaign donors push congressmen, if she so desired. If you ever approach Rowling status with your writing, don't forget to give an interview to your old pal, the Ninja, and then you do things the way you like.

But until then it's worth remembering that Harry Potter and the Philosopher's Stone was only 76,944 words. The lesson couldn't be more American: First you get the money. Then you get the power:)

The vexing thing for jealous writers is that Harry Potter and the Goblet of fire is not bloated and self-indulgent like Harry Potter and the Deathly Hollows. Book 4 is lean, focused storytelling that simply would not be the same if shortened. There are plenty of details and descriptions that could perhaps be cut, but that's where the magic is. For instance, here's a fun aside for fans of the series:

The huge blackboard opposite them was wiped clear of its last message (Bertie Bott’s Every Flavor Beans — A Risk with Every Mouthful!) and now showed BULGARIA: 0, IRELAND: 0.

If this is your first Harry Potter book (you missed 2 great books, and 1 okay read!), you might not be familiar with Bertie Bott's Every Flavor Beans (when Rowling wrote this, they weren't yet available in real life). But for returning fans, this quick mention of them, while not essential to the plot, has the effect of creating an inside joke for reader and writer. It fosters a kinship to Rowling that will keep readers coming back. If she writes The Casual Vacancy 2: Even More Casually Vacant, I'll buy it the day its released, even if the first one, while containing undeniably strong writing, bored me.

More difficult to justify, perhaps, is the odd subplot of the Bulgarian Minister of Magic and Cornelius Fudge:

“Vell, ve fought bravely,” said a gloomy voice behind Harry. He looked around; it was the Bulgarian Minister of Magic.
“You can speak English!” said Fudge, sounding outraged. “And you’ve been letting me mime everything all day!”
“Vell, it vos very funny,” said the Bulgarian minister, shrugging.

I'm not saying it's not funny. I'm not saying I didn't laugh. I am saying it's a subplot involving no one central to the story and could've been cut. This would be far less forgivable if the aside weren't funny, but it's short and a reader can always use another laugh when appropriate.

Over the course of the Quidditch World Cup we learn about Victor Krum and Veelas, both of which will come up later, and we eventually learn the Death Eaters are gathering once again. More important, the Quidditch World Cup provides Rowling an opportunity to acclimate the reader to the idea of international wizarding communities. Also, seeing as how Quidditch is canceled for the year at Hogwarts, it's good Rowling gives her fans some quality Quidditch up front:)

From its portkey beginnings to its Death Eater finale, the Quidditch World Cup is essentially an exercise in exposition. Granted, it's vastly more interesting than the deadly boring sitting and thinking that made up Chapter 2, and it's fun. But every moment of this trip is dedicated to educating the reader about things needed to understand the plot that can't be shown any other way. Why else is a house-elf waiting for the gang when they arrive at their seats with an update about Dobby and the rules of House-elves:

“House-elves is not supposed to have fun, Harry Potter,” said Winky firmly, from behind her hands. “House-elves does what they is told. I is not liking heights at all, Harry Potter” — she glanced toward the edge of the box and gulped — “but my master sends me to the Top Box and I comes, sir.”
“Why’s he sent you up here, if he knows you don’t like heights?” said Harry, frowning.
“Master — master wants me to save him a seat, Harry Potter. He is very busy,” said Winky, tilting her head toward the empty space beside her. “Winky is wishing she is back in master’s tent, Harry Potter, but Winky does what she is told. Winky is a good house-elf.”
She gave the edge of the box another frightened look and hid her eyes completely again. Harry turned back to the others.
“So that’s a house-elf?” Ron muttered. “Weird things, aren’t they?”
“Dobby was weirder,” said Harry fervently.

Perhaps someone with more time than me can post some fan fiction titled Dobby Unchained:) Since I've made such a big deal about word count this week, I want to talk about that last word: fervently. It adds nothing and ought to have been cut.

I realize it's extremely nit-picky of me to complain about this one poor word among 190,631 brilliant words. Rowling has built the pyramids and I'm irritated because there's a slightly jagged stone near the bottom barely perceptible to most viewers. But we aren't looking at this book just as Harry Potter fans and we're not reading it just for fun, Esteemed Reader. We're here as writers and it's our job to obsess over these details.

"Dobby was weirder," said Harry, would be a better sentence. Why (and who the heck do I think I am to edit Rowling)? Dobby's weirdness is not something Harry needs to feel fervent about and if for some reason he did, Rowling should show us rather than tell us. The adverb fervently adds no information that is useful to the reader and it clutters up an otherwise fine sentence. Too many of these clutter words bury a manuscript. Don't worry. I think the Harry Potter series will limp on despite this error:)

There's plenty more to discuss from this chapter, but I see we're running long, so I'm going to limit myself to discussing only the details with which Rowling makes her sporting event interesting for non sports fans. The Ninja isn't a sports fan. When people talk about sports, I feel like a serial killer trying to blend as I smile and nod.

I find Quidditch to be an interesting thought because there's flying involved, but if the whole book were to focus on an underdog Quidditch team rising to victory, I'd set it down. But the way Rowling sets her sporting event aside from everyday, non-magical sporting events is with the details. Those details interest readers of all types, including genetic freaks such as myself who simply can't understand grown men being paid obscene amounts of money to play a game or why so many people would find this more exciting than science or literature.

My favorite of Rowling's details are the team's mascots:

The leprechauns had risen into the air again, and this time, they formed a giant hand, which was making a very rude sign indeed at the veela across the field. At this, the veela lost control. Instead of dancing, they launched themselves across the field and began throwing what seemed to be handfuls of fire at the leprechauns. Watching through his Omnioculars, Harry saw that they didn’t look remotely beautiful now. On the contrary, their faces were elongating into sharp, cruel-beaked bird heads, and long, scaly wings were bursting from their shoulders —
“And that, boys,” yelled Mr. Weasley over the tumult of the crowd below, “is why you should never go for looks alone!”

Granted, Mr. Weasley is just a bit preachy there at the end and one can sense Rowling preaching through him. But for me, I think Mr. Weasley would be a tad preachy in that circumstance (he's a father of mostly boys, after all). And Rowling typically avoids opportunities to preach outside the themes of her stories, which are the indirect method through which writers preach to readers whether they mean to or not.

And that's going to do it. Next week we'll be dealing with Death Eaters in Chapter 9. Why not give it a read and join me here for the Ninja Book Club?


Last Paragraph(s): “They’ll be talking about this one for years,” he said hoarsely, “a really unexpected twist, that. . . . shame it couldn’t have lasted longer. . . . Ah yes. . . . yes, I owe you . . . how much?”
For Fred and George had just scrambled over the backs of their seats and were standing in front of Ludo Bagman with broad grins on their faces, their hands outstretched.


Posted by middle grade ninja at 8:40 AM