Erin Entrada Kelly and I chat about her writing habits and how she learned to focus on what her creative spirit wants her to do. We discuss how she won a Newberry Award and immediately quit her day job, as well as her newest middle grade novel, MAYBE, MAYBE MARISOL RAINEY. We talk about how she always remembers an affinity for the characters and the story and the experience of writing it, but not necessarily the craft involved. Also discussed: the HELLO, UNIVERSE Netflix adaptation, dialogue with inanimate objects, breaking out of your writing bubble, characters achieving their goals before their author, the usefulness of third-person perspective, getting control of negative thoughts, a ghost alarm, and so much more. 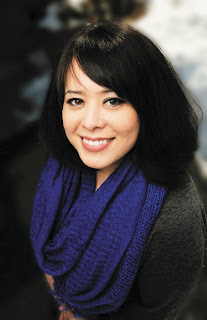 Erin Entrada Kelly received the 2018 Newbery Medal for Hello, Universe, a 2021 Newbery Honor for We Dream of Space, the 2017 APALA Award for The Land of Forgotten Girls, and the 2016 Golden Kite Honor Award for Blackbird Fly, among other honors. She is also the author and illustrator of the Maybe Maybe Marisol Rainey series. She is a New York Times bestseller whose work has been translated into several languages. Her fifth book, Lalani of the Distant Sea, was a finalist for the 2020 Mythopoeic Award for Children’s Fantasy. Lalani received six starred reviews and was named one of the best books of the year by the New York Public Library, The Horn Book, Booklist, BookPage, and others. All Erin’s books are Junior Library Guild Selections. In 2018, Hello, Universe and You Go First were both acquired for adaptation. Hello, Universe is being adapted by Netflix, and You Go First is being adapted for the stage. Erin has a bachelor’s degree in women’s studies and liberal arts from McNeese State University and an MFA from Rosemont College. She lives in Delaware. She teaches in the MFA programs at Hamline University and Rosemont College. She also teaches fiction with Gotham Writers Workshop. Erin is Filipina-American. 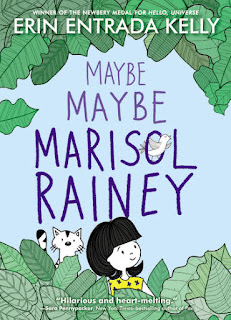 Marisol Rainey’s mother was born in the Philippines. Marisol’s father works and lives part-time on an oil rig in the Gulf of Mexico. And Marisol, who has a big imagination and likes to name inanimate objects, has a tree in her backyard she calls Peppina . . . but she’s way too scared to climb it.

Told in short chapters with illustrations by the author on nearly every page, Maybe, Maybe Marisol Rainey is a must-have for early elementary grade readers.

Posted by middle grade ninja at 7:40 AM