John David Anderson and I talk about a little bit of everything in this far-ranging conversation between two Hoosier authors who like STAR WARS and Kurt Vonnegut. We chat about Anderson’s newest novel, STOWAWAY, as well as his classic, MS. BIXBY’S LAST DAY. Also discussed: writing two novels a year, leaving your heart on the page, space pirates, communicating messages to young readers, the Grateful Dead, flying saucer disclosure potentially messing with our science fiction, the value of writing during a pandemic, mythological action figures, cloning authors in the future, and so much more. 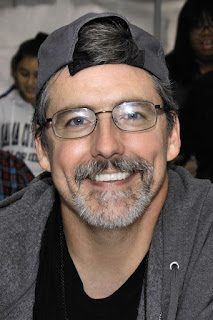 John David Anderson is hardly ever called John David Anderson. He is called Dave by most people who know him, John by the IRS, and Mr. Anderson whenever he's inside the Matrix. He wishes he could go by J.D., but Salinger beat him to it. If he was a Star Wars character he would want to be a Jedi named Raith Starglider, but knows he would more likely be a used Bantha salesman named Bobba Twinklebeans.
A graduate of Indiana University and the University of Illinois where he majored in reading Moby Dick over and over, Dave "Twinklebeans" Anderson is now the author of several books for middle grade audiences, including Sidekicked, The Dungeoneers, Ms. Bixby's Last Day and Posted. The backs of his novels claim that he is "critically acclaimed." His son thinks he is the best writer that ever lived. His daughter thinks he's just alright. His Mom always seems to think he needs to eat more. This last bit is definitely not true.
Dave believes in the power of books to enrich young people's lives and help them to ask (and answer) deep questions while simultaneously laughing so hard they snarf soda through their noses. When he eventually grows up he wants to be Indiana Jones. Till then, he wants to be a root beer connoisseur. He lives with his wife, two kids, and vast Lego collection in Indianapolis, Indiana. 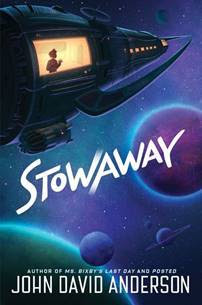 When scientists discover a rare and mysterious mineral buried in the Earth’s crust, they have no idea that it just happens to be the most valuable substance in the entire universe. It’s not long before aliens show up to our little corner of the galaxy offering a promise of protection, some fabulous new technology, and entry into their intergalactic coalition—all in exchange for this precious resource. A material so precious that other alien forces are willing to start a war over it. A war that soon makes its way to Earth.

Leo knows this all too well. His mother was killed in one such attack, and soon after, his father, a Coalition scientist, decides it would be best for them to leave Earth behind. It’s on this expedition that their ship is attacked, Leo’s father is kidnapped, and Leo and his brother are stranded in the middle of space. The only chance they have is for Leo to stow away on a strange ship of mercenary space pirates bound for who knows where and beg the captain to help him find his father.

But the road is dangerous, and pirates, of course, only look out for themselves. Leo must decide who to trust as he tries to stay alive and save his family, even as he comes to understand that there aren’t many people—human or alien—that he can count on in this brave new universe.

Stowaway marks a new genre for Middle Grade mainstay John David Anderson, whose trademark sense of humor and strong talent for adventure, mixed with poignant emotion and strong character relationships, shine throughout this read. Dave has proven himself a beloved choice with middle graders and gatekeepers alike over the years, with realistic contemporary novels like Ms. Bixby’s Last Day and critically acclaimed, heartfelt, and imaginative fantasies like Granted.

Posted by middle grade ninja at 9:24 AM