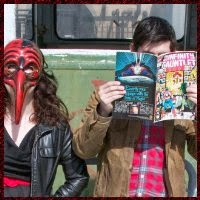 Alex Flynn is the pseudonym for the writing team of Stuart Sherman and Elisabeth Donnelly. They met at a clandestine book club in Boston, where they broke into a fortified tower in order to discuss literature. They like garrulous Irish writers, Pushing Daisies, and anything involving The Tick, from the comic book to the short-lived series with Patrick Warburton. Their secret lair is currently in a hollowed out volcano in Brooklyn.

Their book, The Misshapes, launches in print today! Pick up a copy at Barnes and Noble or Indie Bound.

Only three, that’s unpossible! We moved recently and our books were taking all of the room. But if we have to choose 3 between the two of us, let’s pick Housekeeping by Marilynne Robinson, The White Boy Shuffle by Paul Beatty, and James Joyce's Ulysses.

Depends on the week. We also both write a lot of non-fiction stuff for work (Elisabeth is an editor at Flavowire and Stu is the director of a bioethics Task Force), so probably another 25 hours on top of that. We usually try to spend at least an hour a day writing fiction and 2-3 a day on weekends, so 11 hours or so, which includes editing. That's average, some are much more and some are much less. We probably each read a book or two a week, tomes, and a huge amount of essays and articles. Maybe 40 hours or more a week reading.

Circuitous to say the least. We went through the agent roundelay after 100 or so queries we got a lot of interest but no bites. We were considering self-publishing when I saw Jason post that he was starting Polis Books. We sent a query and some sample chapters and that's what started the ball rolling. Originally it was going to be an e-book, but there was enough interest to put it in print, which we’re absolutely thrilled about!

Hmm, probably a little of both. Bio-psycho-social if you will. Stu’s grand theory is that storytellers are born and writers are taught. There are just some people who are natural storytellers, without having to understand plot structure or how the engage a reader, you can just listen to them for hours. They are often old Irishmen, too. Writing is more of a craft and requires patience, practice, and good teachers (although reading is the best teacher). You can learn to be a good storyteller, but there's something innate about the level of creativity and imagination that can't be taught.  What makes a good storyteller is someone who is naturally curious. If you have curiosity, and you can make the audience curious, you can tell a good story. If you are dedicated enough and put in the time, you can become a good writer.

It’s great to create new worlds and concepts and explore ideas through narratives. Writing is a job, a fun one, and hopefully the resulting stories are fun to read.

For me, Stu, I'm a pretty crappy copyeditor. I was in special education classes until 5th grade because of learning disabilities, which was probably ADHD, but they didn't know it at the time (I wasn't hyper) and chalked some of it up to being diabetic and blood sugars. In reality not classifying me probably helped because I didn't feel confined by something, I just thought (and still do) that I think differently than everyone else, and I eventually learned to compensate in my own. Anyways, I make terribly stupid mistakes in first drafts and feel awful about them. If you ever read a first draft of mine you'd think I'm just learning English and not learning it fast.

Only do it if you love the process. No one gets famous or rich writing, despite the fact that there’s an ethically dubious industry out there of people telling you that they know all the secrets and how to do it right. Even if you do hit it Stephen King big, it's just you and a keyboard most of the time. And go do stuff that’s interesting in the world. Take weird jobs, learn about all sorts of people in the world, get a perspective on things that isn’t your own. Stay curious!

It's a tricky question because some of the greatest writers are probably terrible companions for a meal. I don't speak early Florentine Italian so anything Dante said would be wasted on me. And I'd be worried F. Scott Fitgerald would just get drunk and stick me with the bill. I think I'd like to speak with George Orwell. He was a great writer but also an astute social observer and critic, and I'd like to pick his brain about what's going on in the world today. George Orwell would be amazing.

I, Elisabeth, would also love to talk with Tracy Kidder, your favorite nonfiction writer’s favorite writer, who’s able to take on topics mundane (a house) and great (the development of computers, genocide, human survival), and make them all pulse with relevance. He’s fantastic.