Rajani LaRocca and I discuss the importance of finding a community of writers and how that led her to publication, as well as her newest novel, MUCH ADO ABOUT BASEBALL. We talk about the “slight fairytale” that led her to finding her literary agent, her time as a pitch wars mentor, plantsing, coordinating publicity and school visits (even during a pandemic), her Stem Women in KidLit podcast, the value of an author’s time, how doctoring makes her a better writer, and so much more. 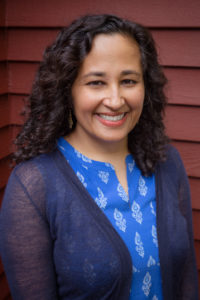 Rajani LaRocca was born in India, raised in Kentucky, and now lives in the Boston area with her wonderful family and impossibly cute dog. A graduate of Harvard College and Harvard Medical School, she spends her time writing novels and picture books, practicing medicine, and baking too many sweet treats. She is also the cohost of the STEM Women in KidLit Podcast. Her middle grade debut, Midsummer’s Mayhem (Yellow Jacket/Little Bee Books), an Indian-American mashup of A Midsummer Night’s Dream and competitive baking, was an Indies Introduce selection, an Indie Next pick, a Kirkus Best Middle Grade Book of 2019, and a 2020 Massachusetts Book Award Honor title. Her middle grade novel-in-verse, Red, White, and Whole (Quill Tree Books/HarperCollins, 2/201), has received multiple starred reviews and is a Junior Library Guild Gold Standard Selection and a Spring 2021 Indie Next Top Ten Title. Her third middle grade novel, Much Ado About Baseball (Yellow Jacket/Little Bee Books) will publish in June 2021 and is Junior Library Guild Gold Standard Selection. Her debut picture book, Seven Golden Rings: A Tale of Music and Math (Lee & Low, 2020) is set in ancient India and introduces the basics of binary numbers. It received multiple starred reviews and is the winner of the 2021 Mathical Book Prize for grades 3-5. She is also the author of the forthcoming picture books Bracelets For Brothers (Charlesbridge, April 2021), Where Three Oceans Meet (Abrams, 2021), The Secret Code Inside You (Little Bee Books, September 2021), I’ll Go and Come Back (Candlewick, 2022), Masala Chai, Fast and Slow (Candlewick, 2023), and more. Learn more about her at www.RajaniLaRocca.com and on Twitter and Instagram @rajanilarocca. 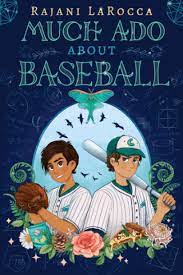 Twelve-year-old Trish can solve tough math problems and throw a mean fastball. But because of her mom’s new job, she’s now facing a summer trying to make friends in a new town. That isn’t easy, and her mom is too busy to notice how miserable Trish is. At her first baseball practice, Trish realizes one of her teammates is Ben, the sixth-grade math prodigy she beat in the spring Math Puzzler Championships. Everyone around them thinks that with their shared love of math and baseball, it’s only logical that they’ll become friends, but Ben makes it clear he still hasn’t gotten over losing and can’t stand her.
Ben hasn’t played baseball in two years, and he doesn’t want to play now—but he has to, thanks to losing a bet with his best friend. Once Ben realizes Trish is on the team, he knows he can’t quit and be embarrassed by her again. To make matters worse, their team is terrible.
Then both kids meet Rob, an older kid who smacks home runs without breaking a sweat. Rob tells them about his family’s store, which sells unusual snacks that’ll make them better ballplayers. They’re dubious, but willing to try almost anything to help their team.
When booklets of mysterious math puzzles claiming to reveal the “ultimate answer” arrive in Trish and Ben’s mailboxes, they each start solving the puzzles, first on their own and then together, and find themselves becoming closer. And suddenly, their baseball team becomes unstoppable. Trish and Ben are happy to keep riding the wave of good luck . . . until they get to a puzzle they can’t solve, with tragic consequences. Can they find the “ultimate answer,” or will they strike out when it counts the most?
Told in alternating voices, this companion to Midsummer’s Mayhem is a fresh take on Shakespeare’s Much Ado About Nothing.
RajaniLarocca.com
StemWomenKidLit.buzzsprout.com
Posted by middle grade ninja at 9:29 AM

Email ThisBlogThis!Share to TwitterShare to FacebookShare to Pinterest
Labels: Bracelets for Bina's Brothers, Interview, Midsummer's Mayhem, Much Ado About Baseball, My Little Golden Book About Kamala Harris, Seven Golden Rings, The Secret Code Inside You, Where Three Oceans Meet