GUEST POST: "An Exclusive Interview with Andrew the Alligator Boy" by Lauren Oliver and H.C. Chester 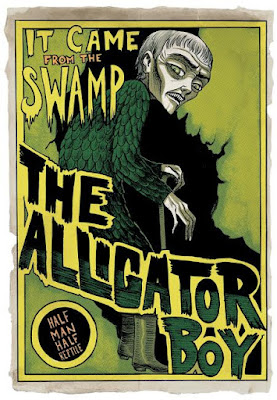 Esteemed Reader, we have a first ever today. I got to interview my first ever fictional character. Those of you Esteemed Readers who've read to the end of Banneker Bones and the Giant Robot Bees know how much I love alligator people.

I jumped at this chance to chat with Andrew the Alligator Boy, a character in Curiosity House: The Shrunken Head by Lauren Oliver and H.C. Chester. Click here to read my review and make sure you check back on Thursday to see the authors do the first-ever joint interview in the history of this blog.

Now seventy-four (or perhaps seventy-five, or even seventy-six, or possibly eighty) The Alligator Boy has been performing on the circuit since he was actually a boy. Bad-tempered and plagued with bad dandruff, The Alligator Boy spends most of his time railing about the way things used to be.


Question Five: Now that you're pushing seventy-five (or possibly eighty), have you asked Mr. Dumpfrey about the possibility of being renamed Andrew the Alligator Man?

Absolutely not. How preposterous! I've been the Alligator Boy these last fifty six years and don't plan on quitting now.

Question Four: Is Solitaire your favorite way to pass the time, or do you have other hobbies you're passionate about?

I like Solitaire because you can play it by yourself.

Question Three: What's your favorite thing about performing in the Odditorium at Dumpfrey's Dime Museum?

When I'm done performing and can head upstairs and be alone.

Question Four: Other than washing the windows, what are your duties around the museum?

I make sure everyone's made their beds up nice and neat with the corners tucked in sharp. Mr. Dumfrey never gave me that job. I just like to do it.

Question Five: Are you at all concerned to be sleeping under the same roof as the possibly cursed shrunken head of Chief Ticuna-Piranha?

Curse, shmurse! The only thing cursed around here is that cursed Max, who won't make her bed! 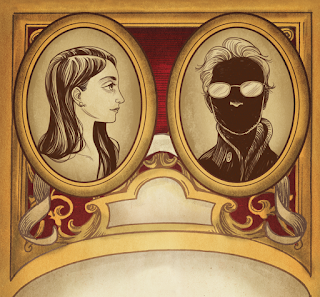 Lauren Oliver is the author of the YA bestselling novels Before I Fall, Panic, Vanishing Girls and the Delirium trilogy: Delirium, Pandemonium, and Requiem, which have been translated into more than thirty languages and are New York Times and international bestselling novels. She is also the author of three novels for middle grade readers: The Spindlers; Liesl and Po, which was an E. B. White Read Aloud Award nominee; and Curiosity House: The Shrunken Head, co-written with H. C. Chester, and a novel for adults, Rooms. A graduate of the University of Chicago and NYU's MFA program, Lauren Oliver is also the cofounder of the boutique literary development company Paper Lantern Lit.

H. C. Chester is a collector of unusual relics who came into possession of the artifacts of the museum’s estate and discovered the story of the four children. (rumor has it he might also be Lauren Oliver's father, Harold Schechter) 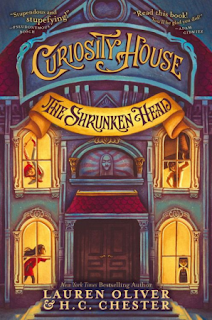 Click here to read my review of Curiosity House: The Shrunken Head.

The book is about, among other things: the strongest boy in the world, a talking cockatoo, a faulty mind reader, a beautiful bearded lady and a nervous magician, an old museum, and a shrunken head.
Blessed with extraordinary abilities, orphans Philippa, Sam, and Thomas have grown up happily in Dumfrey’s Dime Museum of Freaks, Oddities, and Wonders. But when a fourth child, Max, a knife-thrower, joins the group, it sets off an unforgettable chain of events.
When the museum’s Amazonian shrunken head is stolen, the four are determined to get it back. But their search leads them to a series of murders and an explosive secret about their pasts.

haroldschechter.com
Posted by middle grade ninja at 9:58 AM