Erika Lewis and I discuss Irish mythology, world building in fantasy, and planning a series such as the one kicked off by her new middle grade book, KELCIE MURPHY AND THE ACADEMY FOR THE UNBREAKABLE ARTS. We talk about her collaboration with R.A. Salvatore, her approach to different types of projects from comics to novels to screenplays, the pirate Grace O’Malley, multiple ghost stories, flying saucers, and more.

Erika Lewis grew up in Alexandria, Virginia, spent summers with her grandparents in Worcester, Massachusetts, and currently lives in Los Angeles, California. With a passion for storytelling set in magical places, she spends as much time as she can traveling. When she’s not writing, she can generally be found scribbling notes in a blank book while wandering through abandoned buildings, all kinds of museums, and graveyards.

A graduate of Vanderbilt University, her list of credits straddles the comics and novel space, including Game of Shadows from Macmillan’s Tor Books, Firebrand and Acursian from Legendary Comics, #Guardian from Awesome Media & Entertainment, and The 49th Key from Heavy Metal Publishing. The Color of Dragons is her debut YA, coming from HarperTeen October 19th, 2021, and Kelcie Murphy and The Academy for the Unbreakable Arts is her middle grade debut coming from Starscape/Macmillan March 1st, 2022. 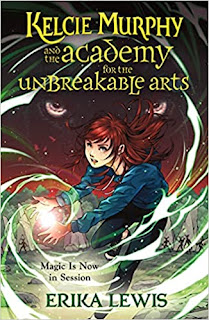 Brimming with Celtic mythology, action, and danger, Erika Lewis's Kelcie Murphy and The Academy for the Unbreakable Arts introduces readers to a new kind of magical school and a warrior who must choose with which side of an epic battle her destiny will lie.The Otherworld is at war. The Academy for the Unbreakable Arts trains warriors. And Kelcie Murphy―a foster child raised in the human world―is dying to attend.A place at AUA means meeting Scáthach, the legendary trainer of Celtic heroes. It means learning to fight with a sword. It means harnessing her hidden powers and―most importantly―finding out who her parents are, and why they abandoned her in Boston Harbor eight years ago.When Kelcie tests into the school, she learns that she’s a Saiga, one of the most ancient beings in the Otherworld. Secretive, shunned, and possessed of imposing elemental powers, the Saiga are also kin to the Otherworld's most infamous traitor.But Kelcie is a survivor, and she’ll do whatever it takes to find her parents and her place in their world. Even if that means making a few enemies.
ErikaLewis.com
Posted by middle grade ninja at 8:54 AM

Email ThisBlogThis!Share to TwitterShare to FacebookShare to Pinterest
Labels: Erika Lewis, Fantasy, Interview, Kelcie Murphy and The Academy for the Unbreakable Arts, Podcast, The Color of Dragons