Debbie Dadey and I discuss her nearly 30-year career publishing over 160 children's books, from her classic debut, VAMPIRES DON'T WEAR POLKA DOTS, to her newest series, MERMAID TALES. She shares how she and coauthor Marsha Thornton Jones agreed to collaborate on THE ADVENTURES OF THE BAILEY SCHOOL KIDS while working out, passing the story back and forth like a hot potato, which went on to sell over 34 million copies and became one of the top three bestselling series in Scholastic's history. She also provides many tips on how to write for children, advice on publishing contracts, critique groups, generating story ideas, creating compelling outlines, planning series, and so much more. This episode is packed with information every writer needs to hear and is not to be missed. 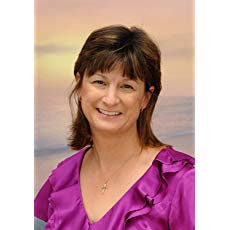 Debbie Dadey taught first grade before becoming a librarian. It was while teaching that she first realized how much she wanted to write a book for reluctant readers. Her first book, Vampires Don't Wear Polka Dots, with fellow teacher Marcia Thornton Jones, was the result of a very bad day. In fact, Marcia and Debbie joked that if they were vampire teachers all the kids would pay attention to them! Since then, Debbie and Marcia have collaborated on more than 125 books with sales of over forty-seven million copies. Debbie has sold 166 books and is enjoying writing the Mermaid Tales series for Simon and Schuster. She has had a great time channeling her inner girl (and inner mermaid) with the adventures of Shelly, Echo, Kiki and Pearl. In each book, the mergirls deal with kid issues, as well as learning things about the ocean in school. Debbie grew up in Kentucky, but has lived all over the country with her family. She currently lives in Sevierville, TN with her husband and two dogs. She loves it when her three children visit and enjoys visiting schools all over the world. She hopes you'll like her on Facebook.com/debbiedadey or visit www.debbiedadey.com. 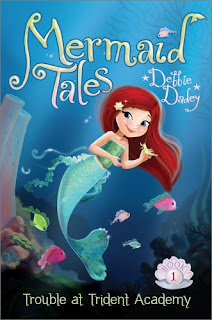 It’s MerGirl Shelly Siren’s first day at a new school, and she is nervous from the tip of her head to the end of her sparkling mermaid tail. How will she ever fit in at the prestigious Trident Academy? Everyone there is so smart and so pretty and so rich. At least she and her best friend, Echo, are in the same class, but so is Pearl, a spoiled know-it-all who only wants to make trouble for Shelly; Rocky, a MerBoy who loves to tease everyone; and Kiki, a shy MerGirl who’s new to Trident City.


DebbieDadey.com
Posted by middle grade ninja at 8:05 AM