Annie Sullivan and I pick up right where we left off after her previous appearance in episode 40. We talk about her soon-to-be-released YA novel CURSE OF GOLD, sequel to TOUCH OF GOLD, as well as SHARKTOPUS VS WHALEWOLF. Since I know Annie has long been an “aspiring recluse,” I’m eager to learn how she’s been enjoying quarantine for Covid-19 and how she’s promoting her new book without leaving home. We also chat about being a TIGER QUEEN in the age of Tiger King, Greek mythology, leaving Easter Eggs for readers, the time I got robbed, the Loch Ness monster, comma warfare, and so much more. 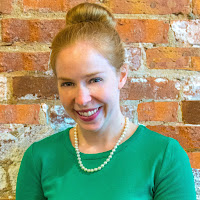 Annie Sullivan is a Young Adult author from Indianapolis, Indiana. Her work has been featured in Curly Red Stories and Punchnels. She loves fairytales, everything Jane Austen, and traveling and exploring new cultures. When she’s not off on her own adventures, she’s teaching classes at the Indiana Writers Center and working as the Copy Specialist at John Wiley and Sons, Inc. publishing company, having also worked there in Editorial and Publicity roles. You can follow her adventures on Twitter and Instagram (@annsulliva). 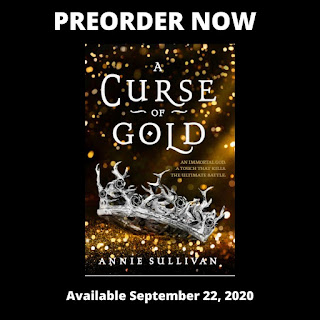 Curses and queens. Pirates and kings. Gods and magic. The final saga of a princess cursed by Midas’s touch, a vengeful Greek god, and a dazzling kingdom in the balance.

After barely surviving thieving, bloodthirsty pirates and a harrowing quest at sea to retrieve her stolen treasure, Kora finds readjusting to palace life just as deadly. Her people openly turn against her, threatening to overthrow her as heir to the throne due to fear of her magical powers. When Dionysus puts out a challenge to kill the girl with the golden touch and burn down her kingdom, it’s not just her future on the throne in danger. Kora’s life and entire kingdom are now on contract.

With no other choice, Kora sets out to find Dionysus, journeying to the mysterious disappearing island of Jipper. If she wants to save her kingdom and have any chance at reversing her father’s curse, she will have to enter into a deadly game with Dionysus, the greatest trickster the world, or the underworld, has ever seen.

Posted by middle grade ninja at 8:58 AM