"I'm back in baby's arms. How I've missed those loving arms. I'm back where I belong."

I hope this post finds you well, Esteemed Reader, and if it does not, I hope you are swiftly on your way to wellness. As I write this, I'm officially a fourth of the way into writing a new middle grade novel and I'm enjoying myself very much. I've been so focused on horror fiction for adults these past couple years (I've even taught a class on the subject), I nearly forgot how much I love middle grade fiction.

Rest assured, Esteemed Reader, I haven't run this middle grade oriented blog these past 7 years as a clever ruse to get you interested in my writing, and then suddenly switch to being exclusively a horror author. The part of my brain that handles marketing and branding insists that's exactly what I should do, but that part of my brain is a bit too cold and calculating for my taste, and I write for love. I've always written for love. Money is nice and necessary, but I know several good ways to make it without dedicating myself to the craft of fiction. In my capacity as a financial adviser, I have never once recommended a client turn their finances around by writing a book:)

I've spent the last few months on a sort of victory lap for The Book of David that is still ongoing as I need to get out there and shake my paperback to promote the series. And I've so loved the kind feedback I've received and am continuing to receive from Esteemed Readers. I took a lot of big risks and swung for the fences with The Book of David and knowing some readers love my story almost as much I do is enormously gratifying. I do a happy dance every time an Esteemed Reader writes me to let me know how happy the final chapter in the series made them. And they inevitably ask me when the next book is coming and I'm all like, dude, I just gave you five horror novels, give me a second:)

But the writer's journey, at least for me, is a lifelong one, and it doesn't end with a single novel (or five of them). Esteemed Readers eager for a new story is always something I'll take into consideration, and I know they want more flying saucers or more zombies or both or maybe something about a scary clown as that's so popular just now. Esteemed Readers know I'll deliver on all the violence and offensiveness of a scary story and I have no doubt that on a long enough timeline, I'll write another one (I've had a werewolf story brewing in my brain for years, and there is an All Together Now 3 if I ever get to it).

Banneker Bones and the Giant Robot Bees is the least popular of my novels and the worst selling. It's also my favorite and the Esteemed Readers who've read all my books tell me it's their favorite as well. I haven't figured out how to successfully market an indie middle grade title, but I also haven't changed the name of this blog to Horror Ninja because I hold out hope that I will. I've gotten far less emails about Banneker, but the young readers who've written me are ticked that I've written another horror story they're not old enough to read and they want Banneker 2 yesterday. I can't do it that fast (and you wouldn't want to read it if I did), but I honestly am writing it now. 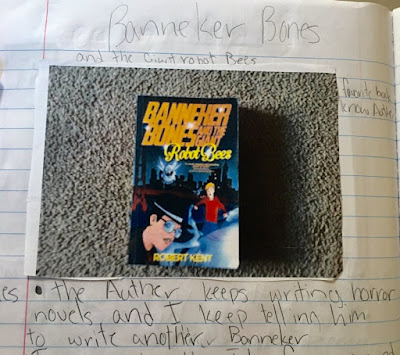 It's exhilarating to find myself back in Banneker's world at the top of a penthouse at 221 Garrett Street. My boy genius detective and his ever faithful sidekick Ellicott Skullworth have got their hands full with a new mystery to solve and new monsters to do battle with. It's like coming home to write new dialogue for Ling and Grandma Juanita and all my other beloved friends whom I haven't seen in far too long. Their concerns are far less brooding than the concerns of David and Miriam Walters and certainly Ricky Genero and Michelle Kirkman. Not to promise there aren't at least some zombies in Banneker 2:)

The real world is a bit too dark for my taste just recently and I'm relishing this opportunity to indulge in a fantasy far less serious in its tone. And it's a thrill to find that after my time away, I still know how to write middle grade. My ninja skills may be a bit rusty (that's what revisions are for), but the basic equipment is still intact.

In The Book of David, I was intentionally channeling the style of Stephen King (however less skillfully deployed), and so was able to indulge in long run-on sentences, seemingly lackadaisical plotting, profuse profanity, and long flashbacks to establish character back story. All those tools have been removed from my writer's toolbox for Banneker 2, but replaced with some also fun-to-use tools I haven't been able to play with for far too long.

After all, this is a sequel to a book in which two eleven-year-old boys rode jet packs to blast giant robot bees out of the skies with EMP rifles. There's no need for extended flashbacks to establish character or a slow build of evidence to convince Esteemed Reader that something they know isn't possible might just be possible for the length of the story. As in most superhero stories, the world of Banneker Bones is so preposterous from the outset that Esteemed Reader either agrees to suspend disbelief going in so we can have a good time, or doesn't. Because middle grade is largely intended for younger Esteemed Readers with minds more open than the minds of adults, less convincing is required.

And yet, just as when I wrote All Together Now, I felt like a middle grade author putting on the airs of a horror author, and now I feel like a horror author putting on the airs of a middle grade writer:) I had always intended for Banneker 2 to be darker than the original story as the second story in a series is traditionally darker, but at times I worry I might be going too dark. We'll see if passages such as this one make the final cut:

Ellicott flew in the opposite direction slowly, the headlights from his jet pack leading the way until they caught on the corpse of an animal laying on the cement walkway. The animal was too long dead for Ellicott to know what it had been.
A rat perched atop it, the dead animal’s decayed eyeball lodged in its mouth. The rat tugged against the cords connecting the eye to its socket the way Ellicott might've pulled a cherry from its stem. When the jet pack’s beams swept across it, the rat leapt into the river of sewage with a panicked squeak and swam away.
Ellicott swallowed the bile that rose in his throat and flew past the dead animal.

Of more concern to me is my planned ending, which is presently extremely dark, at least on the outline. It's the sort of ending that would be perfectly at home in a horror novel (possibly even too light for the horror crowd), but which may prove too mean-spirited for middle grade. As ever, though I outline my novels ahead of time, the characters are welcome to take actions to talk me out of my plans. We'll see if they do or not.

And at the end of the day, I suspect that what I'm feeling is the same early stage fright I have endured during the first act of every story I've ever written. It's also a mindset shift that accompanies going from the high of finishing a project to the low of working in the early stages of a new one (after the initial excitement of the opening). As ever, it's best to take a deep breath and keep writing.

We're going to be doing some cool stuff at this blog as well. I'm going to write some actual reviews of middle grade books to get me back in the proper middle grade mindset, we're going to have some great blog posts, some interviews with lots of interesting people, including some authors who are really, really famous (no spoilers, but one author's name rhymes with Pate Picamillo), and some other authors who soon will be.

As ever, I hope your writing and, more importantly, your reading, are going well, Esteemed Reader. If you'll excuse me, there is a signal in the sky with a ninja in the middle of it and I must return to my own middle grade writing:) It feels good to be back. 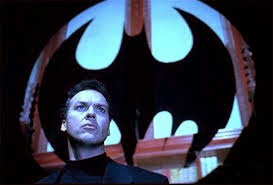 Posted by middle grade ninja at 9:55 AM