Alda P. Dobbs and I discuss writing about the Mexican Revolution as well as her own family’s history in her new novel, BAREFOOT DREAMS OF PETRA LUNA, and then translating that story into a second language. We talk about how Alda gained confidence as a writer, the advice she received from Avi, how she applied for grants and became “hardheaded,” found her literary agent, sold a book and wrote another during a pandemic, and so much more. Oh, and I accuse her of back engineering flying saucers while she was in the air force:) 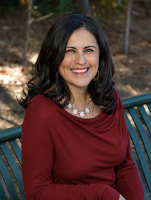 Alda P. Dobbs is the author of the upcoming novel Barefoot Dreams of Petra Luna. She was born in a small town in northern Mexico but moved to San Antonio, Texas as a child. Alda studied physics and worked as an engineer before pursuing her love of storytelling. She’s as passionate about connecting children to their past, their communities, different cultures and nature as she is about writing. Alda lives with her husband and two children outside Houston, Texas. 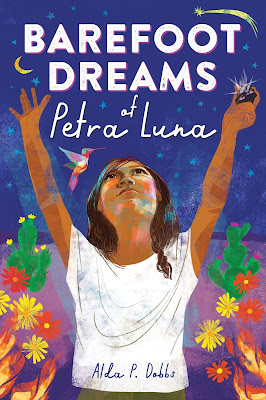 In 1913, during the Mexican Revolution, twelve-year-old Petra Luna and her family flee their burning village. They cross desert plains and battlefields, desperate to escape the wrath of the Federales. Every night, when Petra closes her eyes, she hangs tight to her dreams. In one of them, she can read, and she reads everything – books, newspapers, EVERYTHING. But all of her dreams will have to wait as long as she stays true to her promise to Papa.

Barefoot Dreams of Petra Luna was inspired by the experiences the author’s great-grandmother endured during the Mexican Revolution.

Posted by middle grade ninja at 8:36 AM