Andrew Nehring and I discuss how he learned to improve as a reader and a writer with the aid of an inspiring teacher who helped him manage his dyslexia. And we chat about the publication of his multiple novels, including his newest, DAVID MASSIE AND THE HIDDEN UNDERWORLD. We talk about Skyrim and Elden Ring and also books, as well as tips for plotting around your antagonist, planning and writing a long series, working with Books Forward for publicity, my George R.R. Martin conspiracy theory, ghost stories, and so much more.

Andrew M. Nehring is the author of the Corrupted Light Chronicles and David Massie. Growing up he was always a very imaginative child who would tend to get lost in these worlds he created for himself. That passion for creativity never stopped, but grew as he got older. The idea for the Corrupted Light Chronicles was born out of world he created in his head, as well as the development of the world around him. Andrew has finished his business degree from Northeastern University in the beautiful Windy City. When he is not writing, you will catch him in the ceramic’s studio, working out, or playing video games. He is now writing full time once he has finished and move on into other facets of the entertainment industry. 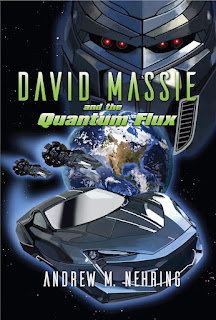 In this ordinary world of extraordinary technology lies a kid genius, David Massie. After the abrupt disappearance of his older brother, Morgan, David spends his days fending off the class bully and searching in Morgan’s past for answers. Then one rainy day, his world implodes thanks to a mysterious dark armored figure. That fateful encounter triggers a series of alternate realities in which David, his parents, his school, even society at large continuously morphs into different scenarios each day. But as strange as those realities were, nothing prepared David for time coming to a screeching halt. To return his world to normal, David teams up with a Time Cop named CP. Together, they unravel the mystery of the Quantum Flux.
AndrewMNehring.com
Posted by middle grade ninja at 8:44 AM